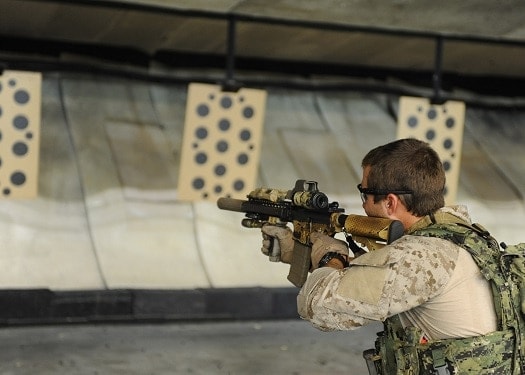 A former Navy employee and the owner of a machine shop will have their day in court later this month over claims that they defrauded the government for $1.6 million.

The two are accused of selling 349 homemade silencers, which cost just $8,000 to produce, to the U.S. military for grossly inflated prices.

The case involves a strange web of intermediaries that include an obscure civilian intelligence directorate of the Navy, a hot rod shop in California and an undisclosed “special access program.”

Mark Landersman, owner of Advanced Machining and Engineering, is charged with manufacturing, selling and shipping the unmarked silencers without a federal firearms license. And then Lee Hall, a civilian Department of the Navy employee of the Directorate for Plans, Policy, Oversight, and Integration, bought the suppressors in a no-bid contract without authorization.

Landersman’s brother, David W. Landersman, was the senior director for intelligence in the Navy directorate who ordered the suppressors. According to court documents, he sent his brother several emails about how to make silencers, including a website with do-it-yourself instructions.

The Washington Post reported security officials incinerated potentially relevant documents last year just after reading about the case in the paper, those expected in court maintain the operation was authorized.

Landersman, who owned a custom car shop in Temecula, California, claims the sterile suppressors were intended to be mounted on a cache of AK-47s seized overseas and warehoused in Pennsylvania that have since been destroyed.

Also, the suppressors were allegedly meant for SEAL Team 6, although representatives for the counter-terrorist unit had denied this.

The directorate involved, which numbers just 10 employees in an oversight capacity, has allegedly been dabbling in secret missions and even attempting to gain authorization to carry firearms in Defense Department buildings stateside although they do not have a law enforcement function. Some have termed the group, “wanna-be spook-cops.”

“By design, that office is supposed to do a little more than policy and programmatic oversight,” a former defense official told the Post. “But something happened and it lost its way. It became a case of the fox guarding the henhouse, and I suspect deeper issues might be in play.”