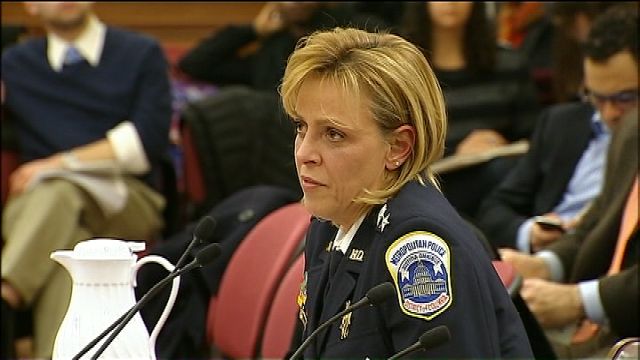 In an effort to satisfy a federal court order mandating that the city stop prohibiting the lawful carry of guns outside the home by Oct. 22, Lanier’s office is preparing to screen the first batch of applicants as early as next week. This comes just days after Mayor Vincent Gray (D) signed a temporary law to allow the practice. In speaking with the D.C. Council’s judiciary committee, Lanier said that applicants would have to show extensive “good cause” to obtain even one of these temporary permits.

For instance, living in a high-crime area or having your home burglarized numerous times would likely not be sufficient in itself to prove the need for a license from the District to carry a gun. Applicants would have to show proof of an enduring threat such as a restraining order, or be able to substantiate that they regularly have to carry large amounts of valuables to be considered.

“Certainly, we can’t anticipate every scenario that someone may present,” Lanier told the The Washington Post. “We have to use reasonable, sound judgment in evaluating what that person articulates as a threat — what makes them feel they have unique circumstances that make them feel threatened.”

While she expressed that further restrictions could be added to a permanent bill, which the committee is currently drafting, Lanier expressed her opinion that those granted permits should have their personal information withheld from public disclosure.

“Suppose that person is someone who has obtained that permit because they transport large amounts of cash or valuables. By making that a public record, you’re now letting people know they carry large amounts of cash and valuables. Same thing for a victim of domestic violence,” Lanier told the The Washington Times. “I don’t think by making that public serves the interest of public safety, and it could increase the risk for somebody who has already demonstrated that they have a specific threat.”

This came in opposition to council member David Grosso, who wants not only civilians but also the police themselves largely disarmed and has suggested that the names and addresses of permit holders be made public knowledge.

Meanwhile, plaintiffs in the case of Palmer v D.C., whose victory struck down the city’s prohibition in the first place, have requested that the court reject the District’s new law as emerging from an “intent to obstruct and frustrate the carrying of defensive handguns to the greatest possible extent.”