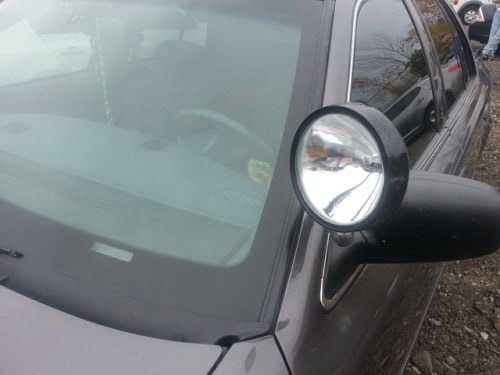 David Scofield was accused of police impersonation after allegedly attempting to pull over an off-duty police officer on the highway in his 2002 Crown Victoria “Police Interceptor.” (Photo: Akron Police Department)

Police on Friday again searched the home of an Ohio firearms dealer and former reserve sheriff’s deputy who police say impersonated a police office after trying to pull over a real one on the highway.

Akron police first executed a warrant on Wednesday to search David Scofield’s house. So far the search has turned up several firearms and ammunition that police said are legally owned by Scofield.

The incident occurred on Monday at about 11 p.m. on Interstate Highway 76 when Scofield, 50, allegedly tried pulling over a police officer on his way to work. The officer was in uniform, but not driving a duty vehicle.

Police said Scofield drove a 2002 Crown Victoria, the same model police use, which was stocked with a “cache” of weapons, the Akron Beacon Journal reported. The vehicle comes stock with a placard on the trunk that reads “police interceptor.” It also had radio antennas, a spotlight and a front “1-800 Grab DUI” license plate that state troopers often use. The rear license plate was registered to another car, police told Guns.com.

Scofield claims he purchased the vehicle at a police auction and shouldn’t be penalized for having it.

Scofield said he didn’t know the other driver was an officer and claimed the man approached his vehicle from behind at 85 to 90 miles per hour and harassed him by tailing his bumper for seven miles, according to a statement written by Scofield and emailed to several news organizations, including Guns.com. Scofield contends that he was simply trying to read the diver’s license plate when he shined the spotlight on the other car.

Police claim Scofield tried swerving into the officer’s lane then shined the spotlight onto the officer to blind him. The officer called Akron and Tallmadge police departments for backup and Scofield was later apprehended.

Scofield’s mother told Guns.com that her son carried the firearms because he was a target shooter, a dealer and also had valid paperwork for them, including a concealed carry permit.

“After the first incident, I told him to get rid of that car,” Dorothy said. “Police tore up his house that he’s lived in for 25 years and now all his neighbors think he’s a criminal. All this from a minor traffic violation.”

Though Scofield had a valid permit to carry, he did not disclose that to officers until after being arrested. According to the police report, Scofield had ample time to disclose his concealed carry status to officers. He was charged with misdemeanors of impersonating a police officer, carrying concealed weapons and obstructing police business.

Lt. Rick Edwards of the Akron Police Department told Guns.com that in his vehicle Scofield had a rifle, shotgun, a bullet-proof vest, a silencer and ammunition, all equipment an officer would carry. He said that this isn’t all over a minor traffic violation and that law enforcement officers’ job is hard enough “without goofballs like this trying to pull people over.”

According to the police report, the responding officer noticed a knife in Scofield’s back pocket, at which point Scofield took the knife and threw it into the car to conceal it. Officers then arrested him.

According to his statement, Scofield has been a volunteer sheriff’s deputy for different counties on and off since 1992. The volunteers are certified by Ohio county sheriffs and undergo the same training as regular, paid deputies. They are also required to serve a specified amount of hours in service to the county and must undergo yearly certification.

The Journal also reported that last year Scofield was arrested in Fairfield County after a traffic stop in which he told an officer that he served a different county than the one he really did. Scofield contends he didn’t claim his law enforcement status because doing so to get out of a traffic ticket wasn’t allowed by the sheriff’s department. Court records showed the case was dismissed, the Journal reported. Fox News Channel 8 reported Scofield was let go from the volunteer position for impersonating a police officer.

Edwards said Scofield has not been a certified deputy in a year and a half and as part of his plea deal last year gave up his deputy certification, hence the impersonation charge.

Scofield told Guns.com he plans on filing suit against the police departments to clear his name.

The article was updated with new information from Lt. Rick Edwards and David Scofield. The article also incorrectly stated that the officer Scofield allegedly attempted to pull over was in plain clothes. According to Lt. Edwards, he was in uniform.