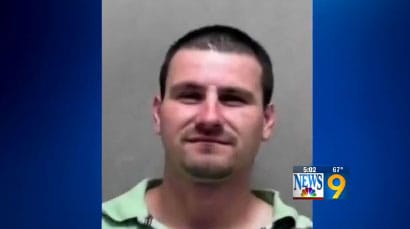 In addition to facing charges, Chris Harris is no longer allowed to teach his Sunday school class, pending the outcome of the investigation. (Photo: WTOV)

A West Virginia man is facing charges after he allegedly fired a warning shot when a group of nine men surrounded him and his girlfriend and threatened to cut him and rape her.

Chris Harris and his girlfriend, CC Roxby, were walking home from church on the evening of Sept. 27 in Wheeling, after teaching a Saturday night “Sunday school” class when they say were approached and circled by the nine men, at least one of who was armed with a knife.

“They surrounded me saying some pretty vulgar things like they were going to rape my wife in front of me, cut me,” Harris told WTOV.

Roxby, who said the incident was “one of the most scariest experiences” she had ever been through, called 911. While still on the phone, she pulled out her legally concealed pistol and aimed it at the suspects. But Roxby’s hands were shaking, so Harris took the gun from her.

Harris hoped the sight of the gun would be enough to deter the men, but it wasn’t. They continued to advance toward the couple, make threats and act in an aggressive manner.

“The kid kept advancing on me, saying it wasn’t a real gun,” Harris said.

So Harris, not wanting to have to shoot anybody, fired a warning shot into the air.

“The cruisers were coming down the street at that point and the young men ran away,” Roxby said. “Instead of them following the gang, the officers arrested Chris for firing a shot into the air.”

Harris was arrested, placed in handcuffs, taken to the Northern Regional Jail and charged with wanton endangerment, meaning he had fired a shot which put others at risk.

Harris’ bail was originally set at $6,000 but eventually dropped to $500. He is currently out on bond, but still faces charges.