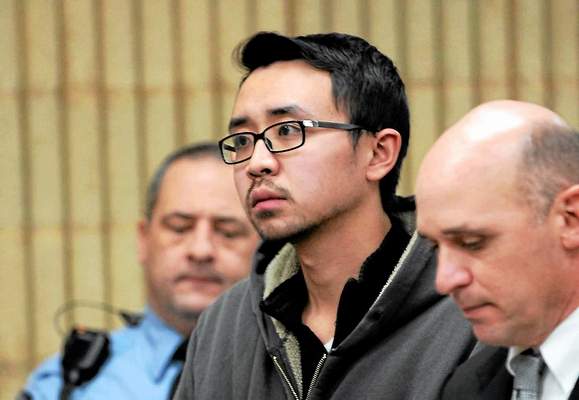 William Dong, 23, a student at the University of New Haven in Connecticut plead guilty to having two handguns on campus and a charge under the state’s new assault weapon ban for a rifle in his SUV. (Photo: AP)

A college student who was arrested after being found with two handguns on campus and a rifle in his SUV pled guilty to weapons charges Friday in what supporters call a big misunderstanding.

William Dong, 23, the now-former University of New Haven student said he carried the handguns for protection against mass shootings but ran afoul of both federal and state charges when it was discovered he had what Connecticut law classifies as an “assault rifle.” He was arrested in 2013 on campus with the two handguns in his possession while a third gun, a Bushmaster rifle, was locked in his SUV just off campus. Dong, who worked at the time for an armored car company, had a clean record and had permits for his firearms, was the subject of a police manhunt on campus after a homeless woman saw the rifle in his vehicle at drugstore near campus and called police.

This led at the time to a campus lockdown until police found Dong and took him into custody. Upon a search of his room, police found newspaper clippings of various mass shootings, which in itself is not a crime but was seized upon by local media. When the smoke cleared, he faced charges for one count of illegal sale or transport of an assault weapon and two counts of having a firearm on unauthorized premises since the university had prohibited guns even with a permit, for which he pled guilty Friday.

“Today’s guilty plea brings an end to a potential tragedy that was prevented due to Connecticut’s new gun safety laws,” read a statement released by Connecticut Gov. Dannel Malloy (D) just as the plea was announced. Malloy has championed the state’s controversial new gun laws on assault weapons that has included a ban and mandatory registration on grandfathered guns. This law has become a hot-button issue in the incumbent chief executive’s bid for re-election.

“This individual imported a newly banned assault weapon into the state in violation of the new law, ” Malloy said. “His weapon was a Bushmaster AR-15. His home and personal belongings contained news clippings on mass shootings – the 2012 Aurora, Colorado theatre shooting in particular.”

The governor stated that the new assault weapon law, coupled with the phone call from the homeless individual and the police response, possibly averted a mass shooting.

“Without the assistance of a citizen who saw something and said something, without the restrictions in the new gun law, and without the quick action of first responders at the University of New Haven and at the West Haven Police Department, December 3, 2013 might have been another tragic day in Connecticut’s history,”  Malloy said.

However, Dong’s friends contend that the situation was blown out of proportion, calling it last year a “huge misunderstanding.” They state Dong carried the guns, a full size Glock 22 and a compact Glock 26, one found on him, the second in a laptop case, because he was fearful of being a victim of a mass shooting event. The rifle was in his truck because the avid shooter had planned to go to the range the next day.

“I’m pretty sure he’s not going to go out and shoot people,” Pallares said. “He frowns on those people. He hates hearing about gun violence.”

Nonetheless, state prosecutors have argued that Dong acquired his rifle in neighboring Pennsylvania where it is not banned and brought it into Connecticut illegally. For that, he also faces upcoming federal charges.

At his Dec. 19 sentencing hearing, Dong could receive as many as eight years but prosecutors state that because of the plea he will have his sentence suspended after two, with five years probation, which is the minimum mandatory for the crimes. He has been in custody since December.