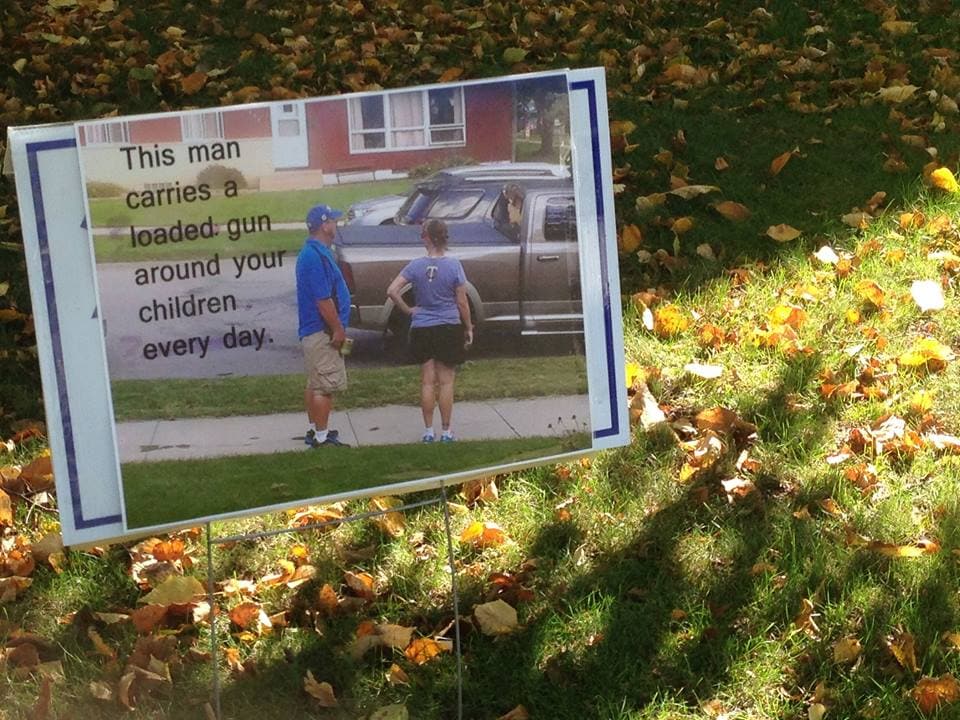 Matthew Halleck, a Minnesota concealed carry permit holder, was outed publicly by a concerned parent of the elementary school he takes his children too. (Photo: KAAL-TV)

After discovering that a local father who brings his two girls to elementary school every morning conceal carries a handgun, a concerned parent posted a sign in her yard with the permit holder’s picture in protest.

The permit holder, Matthew Halleck, is a past president of the school’s PTSA and former candidate for the Rochester, Minnesota, school board. The sign that bears his picture beside a caption that reads, “This man carries a loaded gun around your children every day.”

Although police advised the concerned parent that Halleck was breaking no laws in legally carrying as he takes his children to Harriet Bishop Elementary, this did not sit well with the individual who posted the sign in a private yard across from the school.

Kimberly Edson, the concerned parent, told KAAL-TV that, “Since we don’t have a way to stop him, we felt it was important to notify the neighborhood and the parents that there is an armed man in their presence.”

For his part, Halleck said that he is following state and local laws to the letter and does not bring his firearm onto school property, per state law.

“It’s not crossing the street here, where the crosswalk is, it’s making sure it’s concealed so the kids can’t see it,”  Halleck said.

This is not the first time that an armed parent has drawn attention while taking their kids to school. In 2013, an Arizona school asked an officer of the law to leave his sidearm — and for that matter his uniform — at home.

Both sides in the Minnesota argument have made respective calls to the local police to complain, to which they advise Edson has a First Amendment right to free speech while Halleck has his Second Amendment right to keep and bear arms, and neither have broken the law. However, Halleck is contemplating a civil suit for Edson’s actions.

Meanwhile, she refuses to take the sign down and is considering adding more to her display.

“I have a responsibility to help create the kind of community I want to see, and I don’t want to see a community where there are guns around schools,”  Edson said.