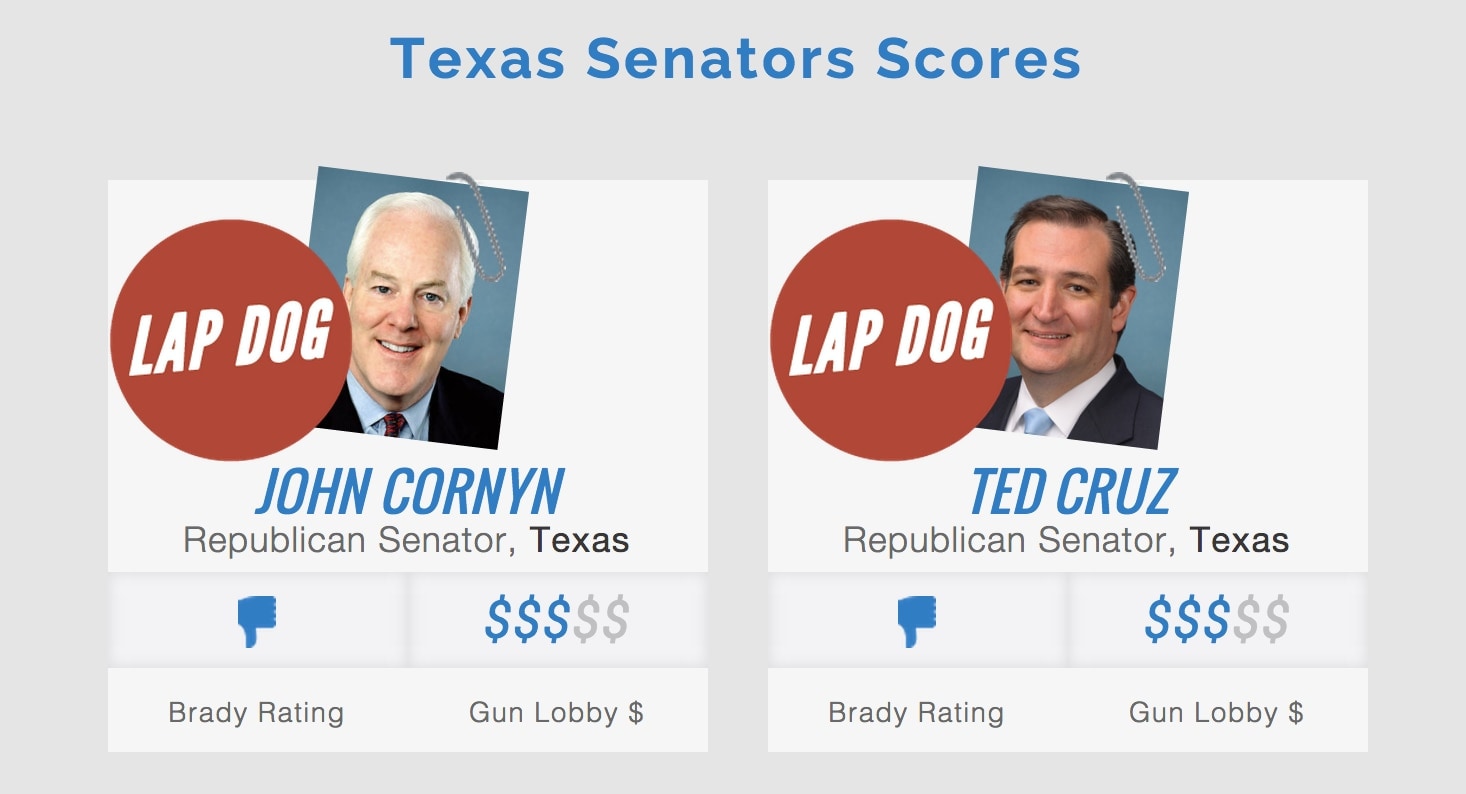 The Brady Campaign to Prevent Gun Violence released its scorecard Monday naming the 12 “worst of the worst” political candidates who the gun control group says have taken money from gun lobbyists.

The group produced a video calling the candidates “lapdogs” for taking gun money in exchange for voting against background checks and other measures pushed by gun control groups.

It may come as no surprise that the first three candidates received endorsements — Stockman got high marks — from the National Rifle Association’s political action committee, the Political Victory Fund.

The PVF rates candidates based on their voting records, public statements and responses to a questionnaire containing a range of questions on the topic of guns and gun policy. Guns.com requested a copy of the questionnaire from the NRA, but that request was declined because the organization does not want the document public, the NRA said.

GOP Senate Leader Mitch McConnell, R-Kentucky, was called out by the gun control group for voting against the Manchin-Toomey amendment, which would have required background checks for most gun sales.

Though overwhelmingly present in the Brady scorecard, Republicans weren’t the only ones named to have taken money from the gun lobby. Democratic Rep. Nick Rahall of West Virginia took in some $71,750 from lobbyists, according to the gun control group. The Brady Campaign called out 281 of the 113th Congress who have taken gun money since 1990, many of which were Democrats. According to Brady, Sanford D. Bishop, Jr., D-Georgia, received $40,850; John Barrow, D-Georgia, $32,200 and John D. Dingell, D-Michigan, took in $51,700.

A Guns.com analysis of endorsements from organization on both sides of the gun debate showed an overlap, with two Democratic candidates both receiving the nod from gun control group Everytown for Gun Safety and passing grades from the NRA. Staci Appel is running for Iowa’s 3rd Congressional District, and Valerie Longhurst, for Delaware’s 15th. Longhurst declined to comment after several requests this month. The NRA also declined to comment.

On the issue of guns, Appel has voted in favor of permitted concealed carry and against firearms possession for domestic abuse perpetrators. She was also against school police carrying guns.

“I am and was a supporter of 2nd amendment rights and the right of law-abiding citizens to bear arms in the Iowa Senate,” Appel told Guns.com in an email.  “I would, however require mandatory background checks for anyone purchasing a gun, including closing the gun and trade show loophole as well as strong enforcement of existing laws for criminals and traffickers.”

Longhurst co-sponsored a bill prohibiting individuals with certain mental health conditions from having a firearm and is a proponent of hunting license restrictions for felons.

Appel and Longhurst weren’t unique in that several thousand Democrats nationwide were given at least a passing grade by the NRA. Many received As and Bs.

Other top contributions from the NRA include Eric Cantor, R-Virginia, $9,900 and Thad Cochran, R-Mississippi, $9,900.

The NRA has contributed more than $673,000 to campaigns this election cycle and lobbied with some $1.88 million. The group’s outside spending totaled approximately $24.8 million in 2014 so far, of which $12 million was spent for Republican candidates and $13 million against Democrats.