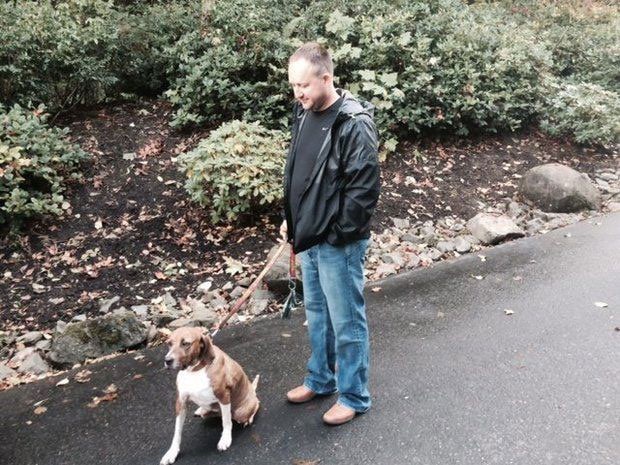 Authorities believe the firearm malfunctioned when the Mike Colbach’s dog tripped the wire. (Photo: The Oregonian)

The Portland Police Department has opened an investigation after a couple found a sort of booby trap with what appeared to be a homemade gun on a walking trail in Forest Park over the weekend.

Mike and Jennifer Colbach were walking on the trail Thursday evening, as they often do, when two men who “were definitely not hikers” walked by them.

“It set off the hair on the back of my neck. They stuck out like a sore thumb,” Mike told The Oregonian.

But the couple continued on and, with the help of their Plott hound, soon discovered a cord stretched across the path of the main trail.

“My wife said, ‘Be careful here,’ and she stepped over the cord,” Mike said.

But the couple’s dog tripped over the cord, rattling something in the woods next to it.

The couple carried on and finished their trek, but the strange experience weighed heavy on Mike, who decided to return to the trail on Saturday. It was then that he discovered the cord was connected to a type of homemade gun hidden from view in the woods next to the path.

The device was made of three-quarter-inch-diameter pipe, which was open at one end and closed at the other. The pipe was attached to the tree and there appeared to be a firing pin at the closed end of the pipe. Attached to the cord was a beer bottle which looked as if it was supposed to swing down to hit the firing pin when the cord was tripped. Inside the pipe was a single shotgun shell.

Mike called a friend, who happened to be a bomb squad technician, who in turn called authorities.

“This is very unusual,” said Portland police spokesman Sgt. Pete Simpson. “These kind of devices are more likely to be found in a rural area where someone is trying to protect something.”

Simpson said authorities believe the device was probably set up on Tuesday and nearby residents said they heard strange noises coming from that area the same day.

No other such devices were found in the park and authorities are keeping the device as evidence.

As for the Colbachs, they don’t want to return to the park anytime soon.

“I’m not going to the park for a while — I don’t want to trip the next one,” Mike said. “Why try and kill someone in broad daylight?”