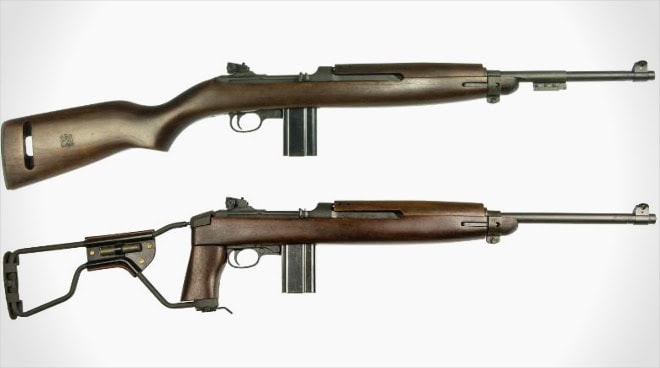 MKS Supply has just announced that it’s bringing back a historical name and historical rifle with the Inland M1 Carbine. These new-production .30 Carbine rifles will be offered in three versions, all matching original configurations.

These carbines are designed to be true to the originals down to the arsenal markings and cartouches, combining history and shootability in a single package.

To ensure that these new-production M1 Carbines don’t get confused with mint-condition originals, they are marked on the barrel and stock to prevent confusion or graft. The modern stamps aren’t visible unless the stock is removed and aren’t visible otherwise, maintaining the classic lines to a T.

The three models MKS is resurrecting are the 1944 M1 without a bayonet lug, the 1945 M1 with a bayonet lug, and the M1A1 Paratrooper with the original heavy wire folding stock.

Like the World War II-era carbines they have walnut stocks and forends that have been patinaed to simulate age and are equipped with classic adjustable peep sights.

These Inland-brand carbines will be marketed and sold exclusively through MKS and are priced at $1,049 for the fixed-stock models and $1,179 for the paratrooper version. Like with most MSRPs we expect real-world pricing to be less and hopefully these modern replicas will be available for $1,000 or less.

The .30 Carbine cartridge is proven to be effective at practical distances, generating close to 1,000 foot-pounds of force pushing a 110-grain bullet at over 1,900 feet per second, about halfway between .357 and .44 Magnum. In a semi-automatic carbine the recoil is negligible and these guns are renown for being fast-handling and even faster-shooting.

Weighing in at a hair over 5 pounds, the M1 Carbine is an extremely versatile rifle. Just as it served troops well, being employed by every branch of the military from World War II through the Vietnam War, it continues to be used by shooters around the world for plinking, hunting, law enforcement and self-defense.

With these new model Inland M1 Carbines, shooters don’t have to worry about damaging a historical piece with wear and tear while still getting to shoot a real M1 Carbine.

On top of that, being new, shooters can know that there won’t be any surprises buying surplus hardware. Availability is sure to be better, although we know these will be popular sellers for sure.