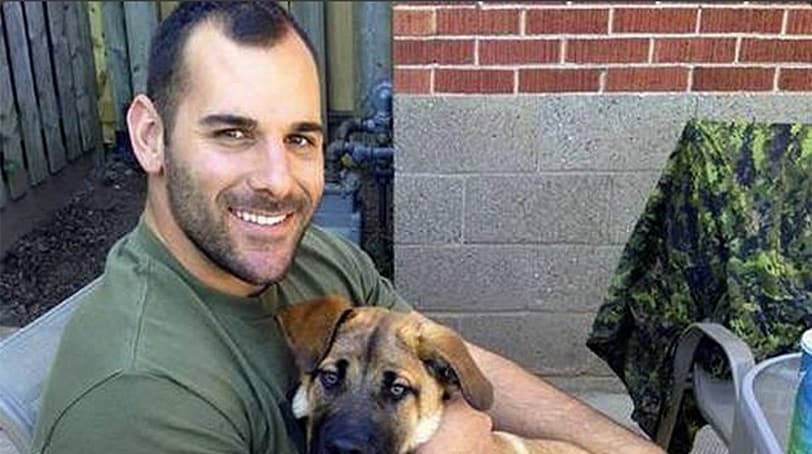 Police identified the shooter as 32-year-old Michael Zehaf-Bibeau, but would not offer any background on the suspect or speculation as to the motive of the shooting, the Associated Press reported. The victim was identified as Cpl. Nathan Cirillo, the Globe and Mail reported.

One suspected shooter was also reported dead and no one is yet in custody, according to Ottawa police.

The military police officer shot at the National War Memorial Wednesday morning after a gunman opened fire there died, the Globe and Mail reported. Officials are still investigating claims that there were multiple shooters involved in the incident.

Ottawa police were called to the Canadian National War Memorial Wednesday morning after several shots fired on soldiers there were reported, according to multiple media accounts.

Streets were cordoned off, buildings were put on lockdown and the Royal Canadian Mounted Police warned people in the downtown Ottawa area to stay away from windows as authorities investigated the attack that occurred just before 10 a.m., the Associated Press reported.

Journalists and others were pushed back from the scene, as police with guns raised looked for what was believed to be several shooters in the area, one of whom could have fled to a nearby rooftop, the Globe and Mail reported.

One officer yelled at the group: ”Move down! There’s an active shooter! If you want to die, stay here. If you want to live, keep moving!” the Globe and Mail reported.

Eyewitnesses said a man with long black hair and armed with what appeared to be a rifle fired four shots at a guard then fled toward Parliament Hill. The guard was transported away in an ambulance. The Globe and Mail reported that one body was visible on the ground in front of the Library of Parliament, but was unsure if it was one of the suspects or an officer. Shots were also reported near Chateau Laurier hotel to the east just before 11 a.m.

“Ottawa Paramedics and Fire Services provided first response to those injured and Ottawa Police Services are engaged with other law enforcement agencies at this time in pursuit of the criminal or criminals who have carried out this vicious and unwarranted attack,” Ottawa Mayor Jim Watson said in a statement, as reported by the Globe and Mail.

Correction: A previous version of this story incorrectly identified RCMP as the Royal Canadian Military Police. 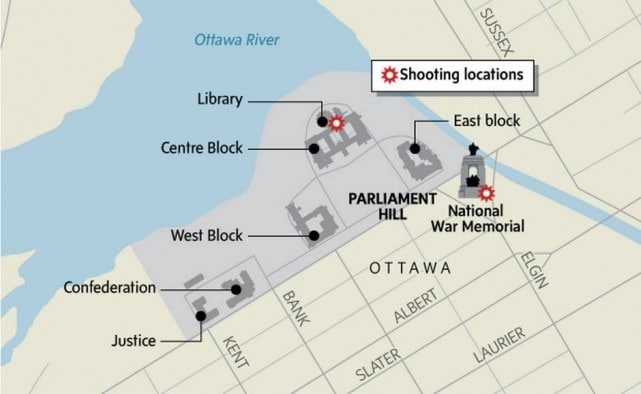 Map of the active shooter incident in Ottawa, Canada, on Wednesday. (Credit: The Globe and Mail)