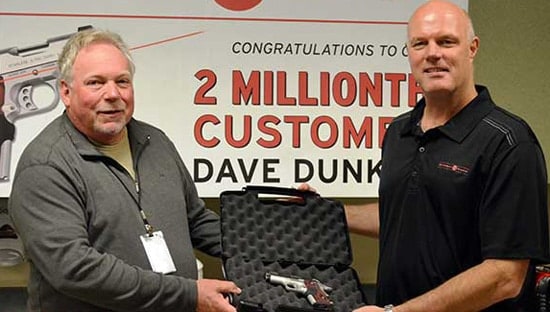 For buying the novelty and a little bit of luck, the company selected him to fly out to Wilsonville, Oregon, for a factory tour and a meet and greet with the CEO, Lane Tobiassen, who awarded him with an engraved 1911 pistol equipped with the patented Lasergrip.

“I am truly honored with this recognition, and [Crimson Trace] makes great products,” Dunker said, who was named the 2 millionth customer after placing an order through the company’s website.

Crimson Trace launched in 1994, developing a laser sight system for a Glock handgun, and patented its staple product in 1996, according to its website.

In it’s 20 years, Crimson Trace has averaged 100,000 customers a year. It now has six distinct product lines that either attach to a firearm rail or grip.

While Crimson Trace caters to a variety of brands and models, it’s most popular models attach to pistols made by Glock, Ruger, Smith & Wesson and Kahr Arms. Prices range from $120 to $320, with an average price of $234.