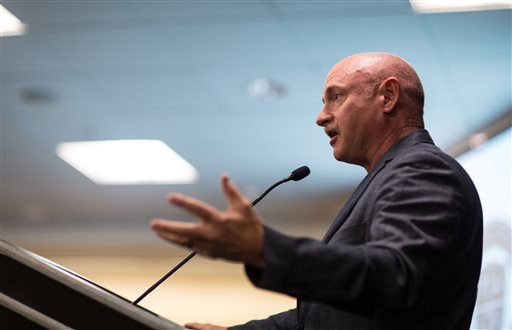 The new Prosecutors Against Gun Violence group, composed of 23 big name criminal attorneys from around the country, opened its inaugural meeting Tuesday in Atlanta.

At the first National Prosecutorial Summit, Vance explained that the group is seeking to establish a game plan to prevent gun violence.

“We’re looking at the scientific evidence in order to be focused and effective,” Vance said. “This is not about slogans but what works.”

Kelly, along with his wife former U.S. Rep. Gabrielle Giffords, founded the political action committee Americans for Responsible Solutions. The PAC currently funds a series of controversial ads in key political races and has undertaken a 9-state road trip to promote a number of gun control concepts to include expanded background checks. It was this subject that Kelly broached with the prosecutors in Atlanta, claiming that a majority of Americans support more background checks, but the Congress and the National Rifle Association has politicized the issue.

“Those 20 little kids at the Sandy Hook Elementary School don’t know the difference between a Democrat and a Republican,” said Kelly, referring to the 2012 Newtown mass killing.

Summit attendees are already working on ways to mutually support each other.

Manhattan-based Vance and Atlanta’s Fulton County District Attorney Paul Howard advise they have decided to collaborate in stemming the flow of guns between the two areas. The discussion “we think will lead to safer communities in New York and in Georgia,” Howard said.