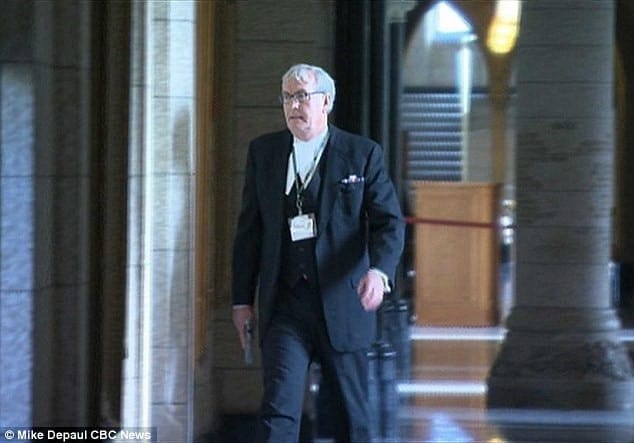 Wednesday’s shooting incident in Ottawa was cut short by the quick actions of the House of Commons sergeant-at-arms, who according to reports, retrieved a pistol from his office and killed the suspect.

Ordinarily armed with a sword and ornate ceremonial mace, the current Sergeant-at-Arms Kevin Vickers was lauded publicly for his actions on Parliament Hill.

Shortly after 9 o’clock yesterday morning, a suspect now identified as Michael Zehaf-Bibeau, a 32-year old Canadian with a criminal record who was recently designated a “high-risk traveler” by the Canadian government, is to believed to have shot a ceremonial guard at the National War Memorial then proceeded to the Parliament. There, Zehaf-Bibeau, armed with a double-barrel shotgun, shot a security guard in the foot, and entered the Hall of Honor. It was in this area that Vickers, armed with a pistol retrieved from a lockbox, engaged Zehaf-Bibeau, killing him.

Vicker’s friends and family who paint a picture of a thorough professional echoed those sentiments. Vickers, 58, is a veteran law enforcement officer with nearly three decades of service under his belt in the Royal Canadian Mounted Police before accepting his appointment in 2006.

“He’s a very intelligent and responsible person. He’s a people person-type fellow, too, but you don’t want to mess with him,” Vickers’ cousin Keith told CBC. “All the boys, the local guys, they’ll be quite proud to hear he did what he did.”

The Sergeant-at-Arms position, established in 1867, has historically been filled by retired army officers with Vickers only the second non-military appointment to the position. Largely an administrative post, they are responsible for removing threats to the parliament. While this normally consists of rowdy tourists and demonstrators in recent years, Wednesday’s incident was not the only time in Canadian history that parliamentary buildings were under attack.

In 1984 an army supply clerk, armed with two submachine guns, entered the National Assembly and took a number of hostages after killing three government employees. That incident was ended after Sergeant-at-Arms Rene Jalbert coolly offered the soldier a cigarette and negotiated his surrender to military police four hours later.

In the U.S., the Capitol is guarded by separate House and Senate sergeant-at-arms along with their deputies. These offices dates back to the 18th Century and, like Vickers, they are armed with ceremonial maces while their respective chambers are in session. Together with the Architect of the Capitol, the two law enforcement officers, who have arrest powers under federal law, make up the board of the 1,800 strong U.S. Capitol Police.

The U.S. Capitol has been the scene of at least five attacks including an assassination attempt against Andrew Jackson in 1835, and two bombings. The most serious incident occurred in 1954 when four Puerto Rican nationalists opened fire from the balcony of the U.S. House with semi-automatic pistols, wounding five congressmen below. The assailants were freed under order of President Jimmy Carter in 1979.

In 1998, a mentally ill man, Russell Eugene Weston, Jr., entered the Capitol and shot two USCP officers before being killed himself.

Canadian Prime Minister Stephen Harper labeled the shootings in Ottawa Wednesday as terrorist acts and promised that there would be no safe haven for those responsible.

“In the days to come, we will learn more about the terrorist and any accomplices he may have had, but this week’s events are a grim reminder that Canada is not immune to the types of terrorist attacks we have seen elsewhere around the world,” said Harper, who was inside the Parliament building during the attack.

Canada recently announced the country would be contributing CF-18 fighters to the effort against ISIS in the Middle East. Earlier this week a hit-and-run that injured two soldiers outside of a strip mall in Quebec and attributed to a radicalized driver later killed by police was also labeled terrorism.

Meanwhile, the Canadian military is asking its members to shed their uniforms in the interest of safety while not on duty.