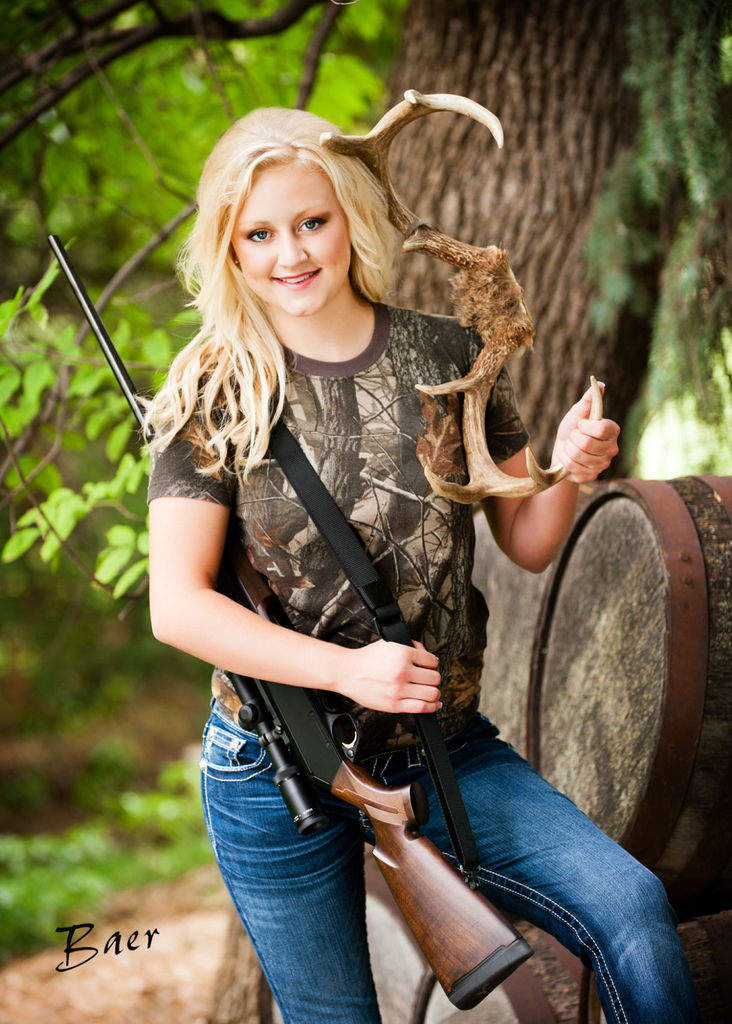 Senior Jillian Dixson of Grand Island, a longtime sports shooter, wanted to pose for her high school pictures with a hunting rifle, and in at least one school in Nebraska; this has the blessing of the school board. (Photo: Brian Baer/Baer Photography via the Omaha World Herald)

After pressure from parents, a Nebraska public school board approved in a unanimous vote Monday to allow graduating seniors to submit poses with firearms to the school yearbook.

The Broken Bow Public Schools Board, located in a rural area outside of Kearney, agreed 6-0 that seniors could appear in the class yearbook alongside guns with a few caveats such as not pointing the firearm at the camera. While there was no set policy barring such photographs, the school had traditionally rejected those with weapons while allowing images with students having other items of sporting equipment as props. The move Monday will now permit seniors to have their arms alongside them, on a case-by-case basis.

“The board I believe felt they wanted to give students who are involved in those kinds of things the opportunity to take a senior picture with their hobby, with their sport, just like anybody with any other hobby or sport,” Superintendent Mark Sievering told the Omaha World Herald.

Seniors submitting photos with guns must be “tasteful and appropriate.” According to school officials, this includes barring game shots if the animal shown appears to be in distress or for instance, “whether it’s a scantily clad girl.”

The district’s high school graduates approximately 50 seniors per year and has strong ties to the shooting sports.

According to the school district website, the Future Farmers of America club at the high school sponsors a skeet shooting team. This same team, in disclosures from the National Rifle Association, is among many in the state that  received grants from the NRA Foundation to help buy ammunition and safety gear for the past several years.

Although the town of Broken Bow only boasts a population of about 4,100, an event that bills itself as the nation’s top pheasant hunt, the Nebraska One Box is celebrating its 54th year in the area. Of the 13 One Box Scholarship recipients this year, all but four are Broken Bow High School seniors.

The school board’s move received little opposition, with even the director of Nebraskans Against Gun Violence stating that, as long as the photos are taken off campus in a safe environment, the change in policy is not a concern.

“For me as a sportsman, I think the policy’s important because it allows those kids who are doing those things a chance to demonstrate what they’re doing and to celebrate that,” explained Broken Bow school board member Matthew Haumont, who is also a state hunter’s education instructor. “I think that’s important and fair in our country.”

Before passing the new policy, the board consulted with other area schools on their senior portrait guidelines and found that many allowed gun pictures.

Other schools nationwide, however, have taken a different stand on yearbook photos that include guns, even if they are for school sponsored events.

In 2005, the refusal of a New Hampshire school to allow a senior to pose with his shotgun went all the way to a federal judge with the backing of the NRA. In that case the court found that the student, who was an avid sporting clays shooter, did not prove the school violated his First Amendment rights.

Last year an entire award-winning Pennsylvania high school rifle team was left out of the class yearbook. When angry parents asked why the undefeated rifle team, which garnered the title of district champions were not even mentioned, school officials claimed they had not received the photo in time for publication although the yearbook photographer claims otherwise.