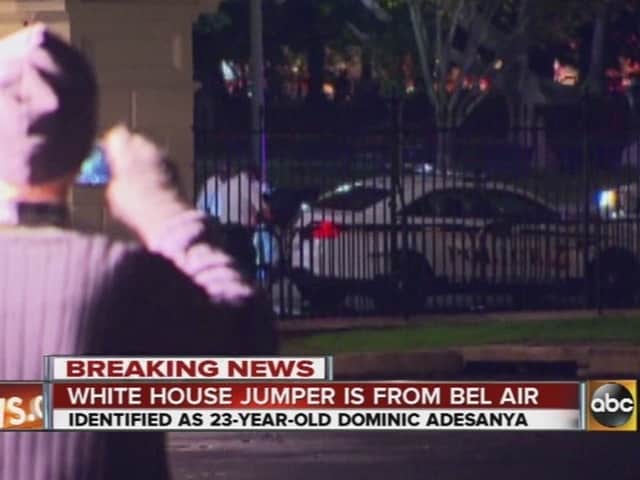 Dominic Adesanya, 23, was taken into custody Wednesday night by the Secret Service after he scaled the fence at the White House. (Photo: ABC 6)

A 23-year-old man is in custody after climbing the fence of the White House Wednesday night and injuring two Secret Service dogs while being apprehended on the North Lawn.

The man, identified as Dominic Adesanya, 23, of Bel Air, Maryland, scaled the barriers outside of the Presidential residence and historic building at approximately 7:16 p.m. Members of the Secret Service Uniformed Branch and their dogs soon captured him. During the struggle, Adesanya allegedly kicked one dog and punched another. Identified in a CNN report as Hurricane and Jordan, the two canine officers were later treated by a veterinarian after receiving injuries.

Adesanya was unarmed and was treated for unspecified  injuries as well.

Adesanya’s father told local media that his son suffers from paranoia, hears voices, and had attempted to get to the White House before but did not go as far as he did Wednesday night. In that case, he was arrested and charged with a misdemeanor.

“He didn’t cross the fence,” said his father. “He was at the gate, fussing at the people, wanting to talk to the president to tell the president about his situation.”

“It’s hard to be in your house and not know if the person you’re living with is trustworthy and to know they’re mentally disturbed like he is.”

Adesanya is currently under the custody of the U.S. Marshals Service for previous outstanding warrants and has been charged with four misdemeanor counts of resisting arrest and unlawful entry.