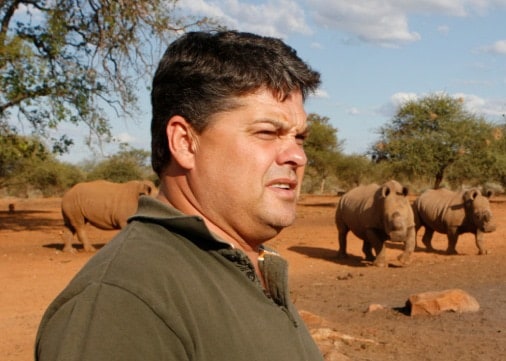 Dawie Groenewald, the alleged mastermind behind the scheme, and a ring of people were arrested in 2010 and charged for similar crimes overseas. (Photo: Africa Geographic)

An African safari company was indicted in a federal court in Alabama for a scheme to defraud American hunters, money laundering and secretly trafficking in rhino horns, the Justice Department announced this week.

According to the indictment, the Groenewald brothers traveled throughout the U.S. from 2005 to 2010 attending hunting conventions and gun shows where they sold outfitting services and accommodations to hunters to be conducted at their ranch in Mussina, South Africa.

During those five years, Janneman Groenewald lived in Autauga County, Alabama, where Out of Africa maintained bank accounts and is accused of money laundering and structuring deposits to avoid federal reporting requirements. Hunters paid between $3,500 and $15,000 for the illegal rhino hunts.

The Groenewald brothers are charged with selling illegal rhino hunts by misleading American hunters.  They lied to hunters by telling them that a particular rhino had to be killed because it was a “problem rhino.”  Rhinos are protected under U.S. and international law.

While no trophy could be legally exported, the hunters could nonetheless shoot the rhino, pose for a picture with the dead animal, and make record book entries, all at a reduced price.  Meanwhile, the two allegedly failed to obtain necessary permits required by South Africa and cut the horns off some of the rhinos with chainsaws and knives.

Also, the indictment alleges that the defendants then sold the rhino horn on the black market.  Eleven illegal hunts are detailed in the papers filed in federal court, including one in which the rhino had to be shot and killed after being repeatedly wounded by a bow, and another in which Dawie Groenewald used a chainsaw to remove the horn from a sedated rhino that had been hunted with a tranquilizer gun. The American hunters have not been charged.