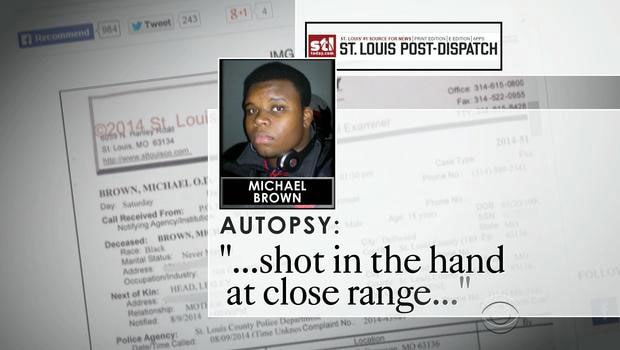 The autopsy showed that Michael Brown had been shot in the hand at very close range, which according to Darren Wilson, occurred as the two struggled to gain control of Wilson’s service pistol. (Photo: CBS)

The investigation into the shooting death of Michael Brown by Ferguson police officer Darren Wilson continues to press forward, but U.S. Justice Department officials criticized the handling of the case on Thursday after details, including the autopsy report, were leaked to local media.

The information, which was published by the St. Louis Post-Dispatch on Wednesday, seemed to substantiate, at least to some degree, Wilson’s account of what occurred the day Brown was shot. Witness accounts of what happened that day vary tremendously, and department officials don’t believe that the supposed leaking of information is helping to ease tensions in the city.

U.S. Attorney General Eric Holder, who met with Department lawyers Wednesday, expressed irritation over the leaked information, and said he was “exasperated” by the “selective flow of information coming out of Missouri.”

Holder called the leaks “inappropriate and troubling.” And he’s not the only one who feels that way.

Justice Department spokeswoman Dena Iverson said, “The department considers the selective release of information in this investigation to be irresponsible and highly troubling.”

Iverson also added, “There seems to be an inappropriate effort to influence public opinion about this case.”

Wilson, as well as Ferguson authorities, continue to claim that Wilson acted in self-defense when he fatally shot Brown. News from the grand jury on whether or not Wilson will face charges is expected to be released within the next several weeks, and the waiting for such information has tightened the already strained relations in the area.

Benjamin Crump, an attorney for Brown’s family, told reporters that regardless of what the investigation or the leaked information supposedly shows, Michael Brown’s family doesn’t trust local authorities to provide justice.

“They have been asking for a special prosecutor from day one and asking for federal intervention because they don’t believe the local officials in St. Louis are going to give equal justice to their child,” Crump said.

“I think what you’re seeing them do is coordinate leaks to the media and to start getting some of the facts out there to kind of let people down slowly,” Fitch said. “I think they’ve recognized that it’s probably very unlikely there will be charges.”

According to a local CBS affiliate, the St. Louis County Medical Examiner’s office, as well as the local police department are not responsible for the leaks.

The grand jury has until January to determine whether Wilson should face charges.