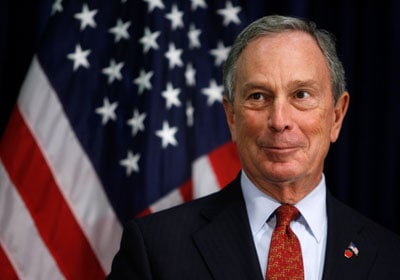 Former Mayor Michael Bloomberg’s Everytown organization has contributed some $1.98 million to fund a ballot initiative in Washington State, outspending the NRA by a factor of 4:1 (Photo: AP)

This week the Bloomberg-backed Everytown for Gun Safety group chipped in an additional $300,000 in funds to the war chest for Washington state’s upcoming anti-gun ballot initiative, now funded at $9.45 million.

The initiative, fronted by the  Washington Alliance for Gun Responsibility, discloses that its top five contributors are Everytown, and billionaires Nicolas Hanauer, Connie Ballmer, and Bill and Melinda Gates. Of these, Everytown’s Action Fund has poured $1.98 million into the effort to pass the 18-page measure to increase background checks.

In defending the outlay, Everytown officials state that what is seemingly just a state ballot initiative that will affect 7 million Washingtonians is actually a national line in the sand in the fight against gun violence.

“When it comes to guns this election, the Washington that matters most is Washington state,” Erika Soto Lamb, communication director for Everytown for Gun Safety, told Guns.com Wednesday.

“I-594 is the only race in the country where voters will have the opportunity to give an up-or-down vote on background checks,” explained Soto Lamb. “Passing I-594 will reinforce what we already know: Americans support sensible gun safety laws. But it will also show that even if elected officials in DC don’t take action to prevent gun violence, Americans will take matters into their own hands.”

Hence in their opinion, the nearly $2 million that the group has invested, as well as supporting studies into the links between what they term as a “loophole” in the state’s gun laws when it comes to background checks, is well-spent.

The list of supporters for and opponents against I-594 is telling.

WAGR has garnered the endorsement of a number of local and national physicians groups, faith leaders, LGBT organizations, as well as the League of Women Voters. The Washington State Democratic Party stands allied with it. Former U.S. Rep. Gabby Giffords, herself a Democrat while in Congress, ended her nine-state tour as a part of her Americans for Responsible Solutions event this week in Seattle, where she spoke in support of I-594.

Besides the state Republican Party and gun rights groups, law enforcement, it would appear, are not enamored with I-594’s confusing language. The Washington Council of Police and Sheriffs (WACOPS) and the Washington State Law Enforcement Firearms Instructors Association (WSLEFIA) oppose the ballot initiative. In addition to these groups, of the 39 elected sheriffs in Washington, 26 — or some two-thirds — have now come publicly out in opposition to the measure.

“I wholeheartedly oppose I-594. It’s just stupid. It penalizes the honest and law abiding citizens, and does nothing to keep the criminals from having firearms,” said Ferry County Sheriff Pete Warner.

So how much money is being pumped into the fight against I-594 by its opponents?

On WAGR’s fundraising Backyard Bucks page, the group contends, “Washington Alliance for Gun Responsibility has been working hard to build the support and momentum we will need to pass I-594. But, we know the gun lobby will again spend millions of dollars to prevent this from happening.”

However, this claim does not appear to be backed by numbers from the gun rights groups.

A troika of those Washington-based groups running a counter-initiative, I-591, namely the Citizens Committee for the Right to Keep and Bear Arms, Washington Arms Collectors, and the Gun Owners Action League, have only raised $1.1 million in the past year to fund their campaign. By this math, WAGR has met its opposition with $8.50 for every dollar that is available to the competing initiative.

Even the recognized national gun rights giant, the National Rifle Association, has been able to come up with but $500,000 to fund its “No on 594” campaign. When compared to the Everytown funding alone, Bloomberg has outspent the gun rights group by a factor of nearly 4:1.

“We knew going into this that we would be outspent exponentially. He has the money and the NRA does not,” NRA media representative Catherine Mortensen told Guns.com Thursday.

Mortensen said that while the NRA cannot contend with Bloomberg and the Microsoft billionaires dollar for dollar, they do bring extra feet to the fight.

“The NRA is actively opposing I-594 but we are heavily invested in our grassroots campaign. We are working with our members and supporters in the state of Washington to get the word out to grassroots groups. We are doing walk and knocks, yard signs, bumper stickers,” Mortensen said.

She contends that while Everytown may have the money, they do not have true grassroots support on the ground in the Evergreen State.

“Bloomberg we have seen, over and over again, it’s an astroturf campaign with him. He’ll come into a community or into a state, he’ll try to buy the hearts and minds of the voters, and it doesn’t work. And it won’t work in Washington. In the final days of this campaign, as word gets out and people understand what the implications of this are, they will oppose it. We believe that as they get more information about what is in these 18-pages, the growing opposition will defeat this,” Mortensen said.

One thing the NRA agrees with on Everytown, however, is that I-594, while a state initiative, is a pivotal battle that could decide the course of the war over gun control versus gun rights in the nation.

“If this is successful in Washington State we can expect to see a cut-and-paste job in other states all over the country where they will try to replicate this,” Mortensen said.