Sandia National Labs is working on a fundamentally-new push-button variable-power scope for military applications that uses a system of flexible polymer lenses that replicate the human eye. This is the first major change in how optics work in about a century.

The scope system was developed at the request of special forces teams looking for an optic that could change magnifications at the push of a button without having to take their eyes off target or even move their hands out of position.

“The impetus behind the idea of push-button zoom is you can acquire what you’re interested in at low magnification and, without getting lost, zoom in for more clarity,” said optical engineer Brett Bagwell, the project leader at Sandia labs.

Bagwell knows what soldiers want from a scope. Before he was an engineer, he was an officer serving in the Army Special Forces.

The level of zoom is controlled with abutton remote, the sort of switch used for tactical lights, that toggles wide-angle and telephoto magnifications. The change in magnification is nearly instantaneous, with magnification changes taking one-quarter of a second.

The lens system was inspired by how many eyes in the animal kingdom work, including those used to read this. The lenses have two components, a tough, hermetically-sealed membrane that encapsulates a liquid polymer within. Some researchers are calling it the “liquid lens.”

Each lens sits in a ring that can compress the polymer, to increases or decreases the curvature of the elements. The scope only requires two lenses, one at the front and one at the back. Traditional optics have a stack of lenses that are moved mechanically back and forth inside the optic. 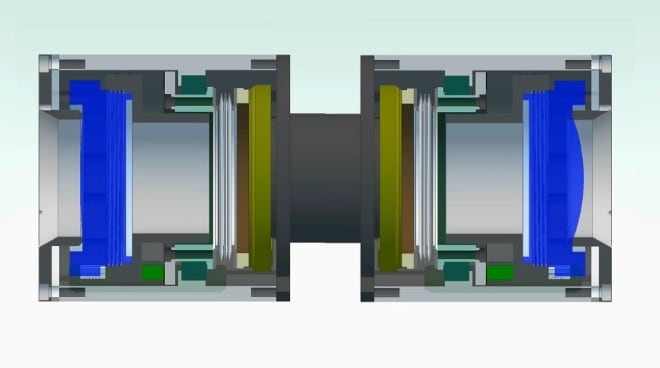 A diagram of the RAZAR’s elements. (Photo: Sandia)

The rings are actuated by ultrasonic piezoelectric motors, the same type of technology some cameras use for their autofocus drives. These have been developed over the years to be as power-efficient as possible.

Interestingly enough, when it came to the drive system, Bagwell got some outside help for the motors from Dynamic Structures and Materials, a Franklin, Tenn. business that specializes in the proven technology.

The motors rotate a screw which controls the pressure ring holding the lens. The curvature of the lens and its focal length change with the amount of pressure on the fluid inside.

The project started in 2006 when the Defense Department put out a request for a scope that could rapidly toggle between magnification levels. Bagwell didn’t find any existing tech that could meet the demands of the request, turning to David Wick, a fellow optical engineer at Sandia Labs, the inventor of the scope’s “adaptive zoom” system. 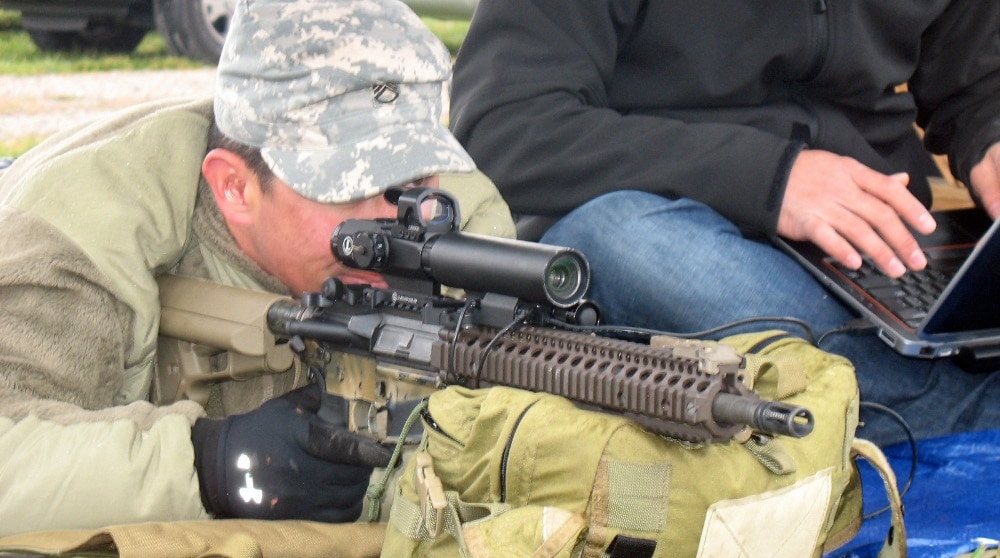 RAZAR has already begun testing with soldiers as far back as 2010. Working with the U.S. Special Operations Command Bagwell’s put the technology through its preliminary paces.

“The guys picked it up and when they pushed the button and it zoomed, and then instantly it zoomed back out, they were like kids at Christmas. There was this look of astonishment and pleasure,” said the former Green Beret sergeant. “That’s very gratifying. Here’s this grizzled veteran looking at me like I’ve just created magic.”

Michael Squire of the Special Operations Research Support Element described the technology as “game-changing,” adding “The difference that can make, especially with somebody shooting back, could mean life or death.”

While there may be more time before we see this tech take over conventional optics, Bagwell is already thinking ahead of the curve, and is developing it for different wavelengths including infrared thermal vision.

The potential for adaptive zoom to change optics is not limited to riflescopes as well. This is a true paradigm shift, with implications for optics for all purposes.