It seems odd to me, even un-American, how citizens of this great nation can have such conflicting views on subjects that affect all of us. A gentleman earns a permit to carry a concealed firearm, part of his Second Amendment rights, while a lady in the same town expresses her low opinion of the practice openly and in public, her rights also guaranteed under the First Amendment to our Constitution — and one right comes to undermine the execution of the other?

Recently in Rochester, Minnesota, Mathew Halleck, a father of two, was seen walking his children to school. The issue was under his shirt — mostly — a concealed pistol a passersby could see barely protruding from his waistband.

I feel fortunate that I live in a country where in most locations the carrying of a concealed firearm is perfectly legal. Yet, in all honesty, I have to admit that if I had seen a stranger’s firearm peeking out near a school (especially in light of some recent school-related shootings) I may have raised an eyebrow as well.

In my case, however, I would have made some inquiries about the gentleman, and if I determined something wasn’t on the up-and-up, I would have contacted local law enforcement. But once the police informed me that the man in question had the right to carry a concealed firearm, I would have happily dropped the subject and been delighted to know that there was another armed law-abiding citizen in our midst.

That would have ended my concerns on the matter, but I am obviously not Kimberly Edson, also of Rochester and who lives across the street from Harriet Bishop Elementary School.  After she was informed by the police that Halleck had the legal right to carry while walking his children to school, Edson used her “First Amendment rights” in a most alarming way to express a dim view of firearms being carried anywhere near her home: 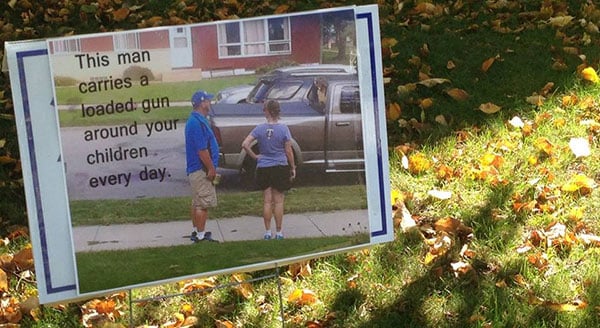 Kimberly Edson, told KAAL-TV that, “Since we don’t have a way to stop him, we felt it was important to notify the neighborhood and the parents that there is an armed man in their presence.” (Photo: KAAL-TV)

Not only did Mrs. Edson post a sign on her property informing neighbors that there was a man carrying a firearm near to school property, she included a photograph of Mr. Halleck on the sign.  The sign reads, “This man carries a loaded gun around your children every day.”

On the surface, Mrs. Edson has a Constitutional right to express her opinions, even if that means posting a sign with her neighbors photograph on it for all to see. I think I can agree here (in principle at least). But Halleck also has a legal right to carry his firearm concealed near the school’s property. I agree with that as well.

So I think, at this point, the question becomes, whose actions present danger to the children?

To start with, I must say that if you are going to concealed carry, conceal your firearm for goodness sake! All of this nonsense could have been avoided if Halleck’s firearm had remained hidden as it was intended and as is the prescribed practice of any reputable concealed carry instructor I know. But in this scenario making a harmless mistake and publicizing this harmless mistake so that it is essentially made every day are two very different things, and in this writer’s opinion the latter holds the potential for much graver consequences for the people of Rochester.

First, I would imagine that in this small community, everybody knows one another. I would also imagine that the knowledge of Halleck carrying a firearm would filter down to the children and Halleck’s kids could end up targeted, bullied, or, worse, because of the attention brought onto the family by Edison’s sign. Second, since news of this has made it to the local and national media, there is now the remote possibility that some ne’er-do-well close by the Halleck’s now knows of another household with at least one gun in it to burglarize (and thieves know, where there’s one gun…).  And third, and probably most importantly, is the possibility that now a crazed madman could now believe that with the exception of one armed father (who he now has a picture of), Harriet Bishop Elementary School is yet another “gun-free” zone.

I believe that these are the only real dangers at play in this story. Yes, I think Halleck’s children could well end up being bullied or ridiculed over this incident. Hopefully no harm comes to them.  Yes, indeed, a burglar could now easily find out where Halleck’s live, now or down the line, and try to burglarize their home.  Perhaps even vandals could target them. And, yes, it is not beyond the realm of possibility that this could be the knowledge that convinces some lunatic to attack what he believes is a defenseless school. The point is that if the information that Halleck carries had been kept fairly quiet, none of these things would be an issue… and now they are an issue.

Perhaps the last consideration is to wonder if Mrs. Edson’s sign, first sitting on private property for all to see and then aired on local news outlets, is less an expression of concern and yet another attack on our Second Amendment rights? While Mrs. Edson has the absolute right to express her opinions regarding concealed carry and firearms in general, to me her sign is clearly a not-so-subtle attack on our natural right to self-defense.

The way Edson worded that sign makes me believe she is has an emotional bias against firearms.  She went for the dramatic prose, “a loaded gun” instead of simply being forthright about the matter. From what I can gather, she never asked Halleck anything, so how does she know if the gun’s loaded?

Yes, I know, of course it was probably loaded, but Edson didn’t know that for certain despite advertising it to the neighborhood, and I believe its the littlest assumptions that can have the biggest negative consequences. What I do know for certain is that to a growing number of Americans do think having law-abiding folks carrying firearms, even if they are close to a school, makes perfect sense. And, in that respect, this sign shows how the willful distortion of one right can deeply undermine the exercising of another–with potentially deadly results. 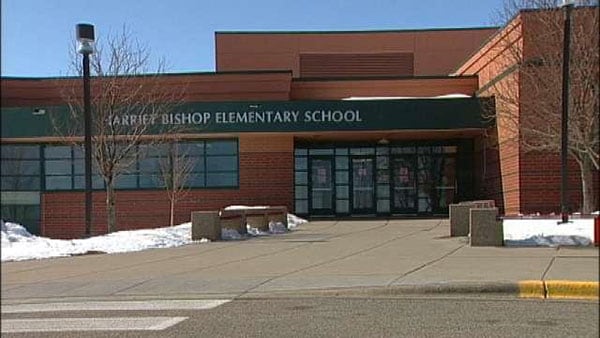 Likewise, I checked with the Minnesota Department of Corrections website, which lists 14 “Level 3” registered sexual predators living in the same general vicinity of the Harriet Bishop Elementary School. Most of those registered sexual predators committed unspeakable crimes against young children. Why not post their images in the front yard for all to see? Wouldn’t that make far more sense, and even serve a useful purpose, rather than going after a lawfully armed citizen who only wishes to protect his kids? A person’s motivations are sometimes more obvious when you focus on what they are not saying or choosing to ignore.

In an attempt to speak with Mrs. Edson, I placed two calls to her residence. Both went unanswered. A voice message was also left, but I have yet to hear from her.  To be quite honest, this is understandable, as I would imagine her phone ringing off the hook following the public exposure over this case. Mrs. Edson did however tell ABC 6 that her reason for putting up the sign was that she didn’t, “want to see a community where there are guns around schools.”

But then I wonder what exactly does Mrs. Edson wish for? A school that is classified as “gun free?”  A school with no defensive mechanisms in place, such as armed officers, on campus? 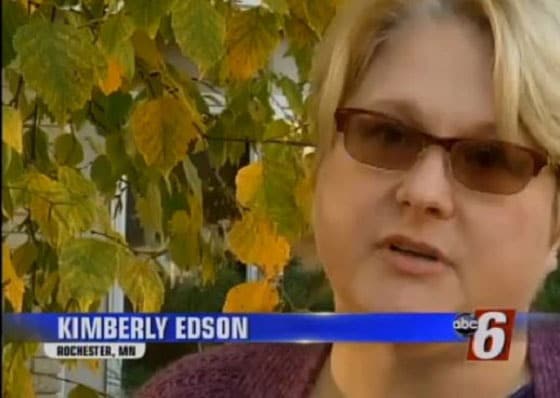 To me this seems an open invitation for another national tragedy such as Columbine in 1999, or Sandy Hook in 2012. Having a concerned parent legally carrying a concealed firearm as he walks his two children to and from school each day is perfectly logical. He’s breaking no laws. He logically presents no threat, rather he is a deterrent to potential violence and should be applauded for what he does.  So what gives Edson the right?

I also called the Rochester Police Department in Minnesota, and was thankfully put in touch with Captain John Sherwin, who managed to put things into perspective. He said that, “We’re here to enforce the laws, and not take sides in these matters,” reaffirming that Halleck has the right to carry a concealed firearm and Edson has the right to express her opinions on it as well. But he also added that this whole matter, “took on a life of its own,” and that it has now become “political” in nature.

Captain Sherwin went on to cite that Edson has been receiving quite a lot of harassing emails. That truly is unsuitable, because no matter if we agree or disagree with someone’s opinion, harassment of any sort has absolutely no place in a debate. Captain Sherwin was kind enough to later call me back to tell me that a group from out of the area was considering participating in an “Open Carry” rally in front of Mrs. Edson’s home!

At the end of the day, Mrs. Edson, “plans on putting more signs up about her view on gun culture” and Mr. Halleck believes if this whole situation heightens the awareness of how the carrying of concealed firearms by law-abiding citizens can add an extra level of security, it was all worthwhile.

Mr. Halleck and Mrs. Edson, both law-abiding citizens of their community, have opinions that are worlds apart. This is the fabric of our country. One must, however, take into consideration the motivating factors when looking at these types of cases. Mrs. Edson’s reasoning seems misplaced and unreasonable, given the fact that Mr. Halleck did absolutely nothing wrong, and her actions make it difficult to exercise his rights. And to her and those who support her, I say go after the law-breakers, the pedophiles, all the miscreants of society, and leave the Hallecks of the country alone.