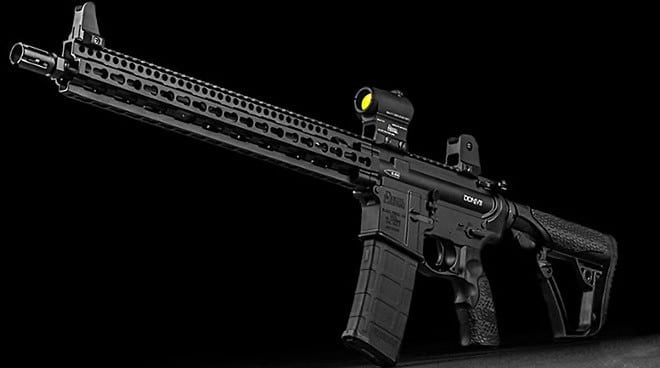 Daniel Defense has just released its SLiM rails for individual sale along with an updated Aimpoint Micro mount for Aimpoint and compatible red dot sights. This is great news for AR-15 enthusiasts looking to build their next rifle or upgrade an existing one.

The handguards ship with all the mounting tools. (Photo: Daniel Defense)

The Slim, Lightweight and Modular rail system was launched earlier this year but until now has only been offered on DDM4v11 series of rifles and pistols. A KeyMod system, the rails, are lightweight and easy to handle.

The rails use Daniel Defense’s established Light Rail III barrel nut so it will also be a straightforward upgrade for users looking to trade in their quad rails for a KeyMod handguard. Naturally they are free-floating rails for the most when it comes to accuracy and are designed to work with standard low-profile gas blocks.

The two-piece barrel nut system is all steel and sports a set of anti-rotation tabs to hold the handguard in place. Because of this it’s generally recommended to use these handguards with MIL-SPEC upper receivers.

Daniel Defense is offering the handguards in two lengths, 12 and 15 inches, and one size fits all with their Micro mount that, thanks to an included spacer, can provide both an absolute and lower-thirds cowitness with backup sights on rifles with AR-15-height irons.

The Aimpoint Micro Mount with, top, and without the spacer. (Photo: Daniel Defense)

These new accessories are all machined from 6061-T6 alloy aluminum and have a MIL-SPEC hard-anodized finish. The handguards have a continuous 12-o’clock Picatinny rail and KeyMod slots at three-, six- and nine-o’clock.

By going with KeyMod, these handguards provide a smooth, low-snag surface that’s extremely easy to hang on to that can quickly and easily be modified with direct-attach accessories or with additional rail sections for non-KeyMod accessories.

In contrast the new Micro Mount is designed to attach to standard flattop rails, which is to be expected. It attaches with two countersunk screws that are completely snagproof and thread into stainless steel inserts that won’t strip or wear with use.

Like many new products for the AR market, all of these new Daniel Defense accessories cut as much weight as possible. The longer 15-inch handguard weighs just 11.2 ounces, on par with fixed polymer handguards. The 12-inch rail weighs even less at 9.9 ounces. And for the seriously weight-conscious rifle builder, good news, the Micro Mount weighs a mere 1.8 ounces — 1.5 without the lower-third spacer.

In a sense Daniel Defense is going back to their roots with these new accessories. “In the early years, we earned the reputation of being a rails & accessories company,” said company president Marty Daniel. “It remains a core element of our business, and this upgrade to the Aimpoint mount demonstrates our ability to take a proven product and elevate it to the next level.”

“We’re fired up about our customers having access to this new rail system,” Jordan Hunter, Daniel Defense’s marketing director. “The feedback we received after launching this railed forend, our first featuring KeyMod, confirmed we hit the mark and met user expectations.”

Both rails have an MSRP of $279 which puts them in the middle of the tactical handguard pack and as always we expect real-world prices to be noticeably lower. The Aimpoint Micro Mount is especially affordable priced at $79. For more information about these and other Daniel Defense head over to the company website and check them out on Facebook for news and updates.