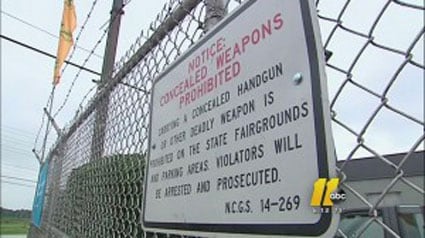 In addition to the fairgrounds, concealed carry is still prohibited in many government buildings, including the State Capitol Building, the Executive Mansion, the Western Residence of the Governor and any courthouse. (Photo: ABC)

Two people were robbed at gunpoint Saturday night as they left the North Carolina State Fair, which has been at the center of controversy after a judge ordered the fair to remain a gun free zone, despite expanded gun legislation.

The victims told authorities that around 11:30 p.m., as they were walking to their vehicles after attending the fair, they were approached by two armed men who demanded money, WATE reported. The victims handed over their wallets, and the suspects then drove off in a tan or cream-colored Lincoln.

No one was injured during the robbery, but some are left saying that the recent decision to uphold a ban on legally carried guns at the fair left the fairgrounds a virtual playground for criminals seeking easy prey.

“By announcing to violent predators that people attending the North Carolina state fair would be unable to protect themselves, the responsibility for this armed robbery of fair-goers lies squarely with Agriculture Commissioner Steve Troxler, who illegally banned concealed at the fair, and Superior Court Judge Donald Stephens, who willfully misinterpreted the law to impose his own worldview,”Paul Valone,, president of Grass Roots North Carolina, said in a statement sent to Guns.com.

“They are lucky nobody was seriously injured,” Valone added, adding the issue would be revisited by the group when the legislature convenes.

Although firearms were banned from the State Fair in the past, last summer legislation was passed which expanded gun rights across the state. Many believed that the legislation, which basically allowed a concealed handgun to be carried anywhere unless otherwise prohibited, made it plausible to reevaluate the ban on guns at the fairgrounds.

However, Agriculture Commissioner Steve Troxler, decided “on the side of public safety, common sense and the welfare of the State Fair,” to keep the ban in place. Wake County Judge Donald Stephens then denied an injunction to suspend the “no guns” policy.

“Our policy at the State Fair has always been not to allow weapons at the fair. It is our intention to continue that policy until we are instructed by a judge or the legislature to do otherwise,” Troxler said in a statement sent to Guns.com earlier this month. “In my mind, as a supporter of the second amendment, as a gun owner and as a grandfather, I believe the mix of kids, guns, rides and large crowds is a bad idea.”

Troxler then went on to explain that the State Fair has a “significant law enforcement presence on the grounds every day.”

But Valone maintains sometimes that simply is not enough.