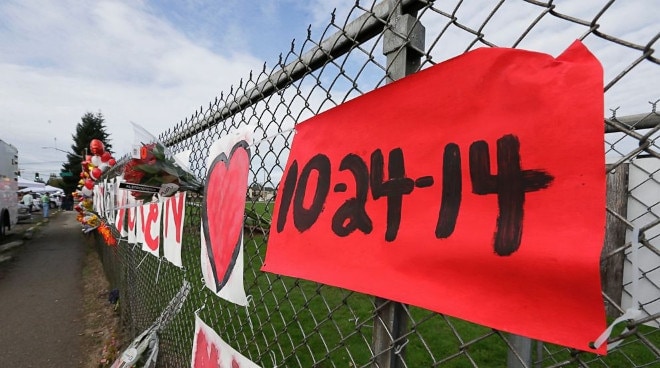 The Marysville-Pilchuck High School memorial mourns all those affected by the shooting, including the shooter. (A.P./Ted S. Warren)

Prior to the school shooting at the Marysville-Pilchuck High School, Jaylen Fryberg lured his victims to lunch with text messages. Fryberg is thought to have sent his ex a “selfie” with him holding a firearm.

The .40-caliber handgun used at the crime was bought legally by a relative, although how Fryberg came to it is unknown. It is likely that he took the pistol from his father. Fryberg, 15, was too young to legally purchase a handgun.

All of the shooter’s victims were friends and the reason for the killings is unknown. Investigators say they may never determine what made Fryberg shoot them and himself, but his motivations were clearly not random.

They were “Really happy, smiling kids,” counselor Matt Remele told Fox News. “They were a polite group. A lot of the kids from the freshman class were close-knit. Loving.

Victims include Zoe R. Galasso, 14, Nate Hatch, 14, and Andrew Fryberg, 15, both of whom were Fryberg’s cousins, Shaylee Chuckulnaskit and Gia Soriano. Galasso and Soriano have died along with Jaylen Fryberg, whose death has been ruled a suicide.

Jaylen was a popular student at the school and from a prominent family of the Tulalip Indian tribe.

The entire community is in mourning, remembering Jaylen along side the other students.

On the chain-link memorial outside of the school, people have made hearts and set out candles for Jaylen and all of the students and families affected by the shooting.

“Usually there’s so much anger and frustration and bewilderment in the aftermath, and generally the shooter is not someone who was this loved over time,” said Carolyn Reinach Wolf, an attorney with a focus on mass shootings, to the Associated Press. “This is a very different response. Some of that is a credit to the community: People are able to get past the grief of the victims and see that the shooter’s family is grieving and horrified just as much.”

“I’m very big on training people to watch for the change, watch for the red flags,” she added. “Yes, he was popular, but there came a time when something changed. If people are educated to look for those, these are things they can do intervene.”