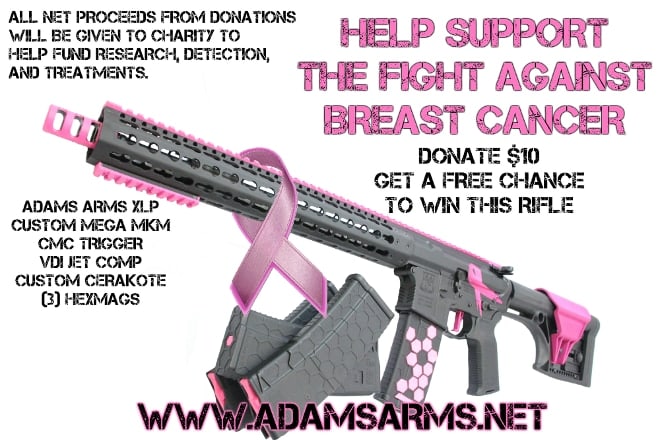 Fighting breast cancer one round at a time. (Photo: Adams)

Halloween is coming and that means more than ghosts and goblins, when it comes to guns, it means sales. Parts kits, uppers, free magazines and more are up for grabs if you act fast.

Adams Arms, which makes piston-driven AR-15 rifles, is offering a handful of complete uppers at fire sale prices. This includes a pair of Tactical-series rifles with free-floating Samson modular handguards. These 5.56 NATO uppers start at $458 and come in 16-inch and 14.5-inch models with permanently-attached muzzle devices.

Adams is also offering a piston-driven carbine upper with a 16-inch barrel chambered for 5.45x39mm, which is perfect for the generally dirty ammo. Check them out here.

You don’t even have to spend that much to pick up an Adams Arms rifle if you’re lucky. To raise money for the fight against breast cancer the company is raffling off one highly-customized premium rifle. Tickets are going for $10 each and all of the proceeds will be donated to the Morton Plant Mease Susan Cheek Needler Breast Center.

Anyone who buys $50 will get a free VDI JetComp with a custom pink Cerakote finish. The drawing will take place at the Brownell’s Lady 3 Gun Event on Nov. 1. 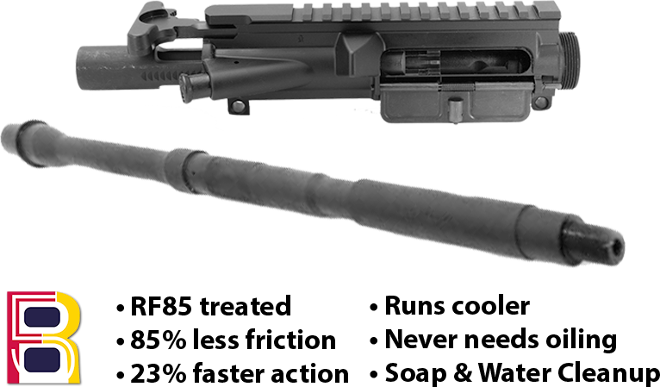 Anderson Manufacturing is getting into the Halloween spirit with a sale on its 80 percent kits. These kits have all the parts a builder needs to complete an AR-15 from flash hider to buttstock except a lower receiver. Handily enough they include an 80 percent lower for the home gunsmith to complete without having to go through the hassle of dealing with an FFL.

It’s got a nice spread of 80 percent kits including carbine and pistol kits. The pistol kits come with SIG SB-15 stabilizing braces but are also offered as SBR kits for people happy to get their rifle stamped.

Anderson is also offering a complete upper receiver and barrel set with its RF85 treatment. This permanent coating is designed to never need lubrication — Anderson guarantees you can run them completely dry. For that and more visit the company’s kits page.

If you’re in the market for a SCAR 17s now’s the time with FN’s Power up your SCAR promo that includes four free magazines and a SureFire Fury Scout light or a Midwest Industries extended rail system. Either way you’re looking at hundreds of dollars of free gear if you buy a SCAR 17s in the coming weeks.

This is a smoking deal and it will keep going well after the Halloween candy’s gone. The Power up your SCAR promo is good for all SCAR 17s sales between now and December 15. More details can be seen here.

SilencerCo just wants to spread the spooky cheer with this fun and very free-to-watch video.

The Utah-based company doesn’t have anything on sale but that doesn’t mean it isn’t busy cranking out new product after new product. SilencerCo just announced that it’s getting into the barrel business with extended, threaded barrels for popular Glock pistols and more to come in the future.

We know that these aren’t all the deals this Halloween, Aero Precision, Damage Industries, the Kentucky Gun Store and Primary Arms are just a few companies handing out more than candy this week, things like this $400 Mepro Tru-Dot RDS.

If you know of any companies with Halloween specials go ahead and share them in the comments. Give everyone a chance to save!