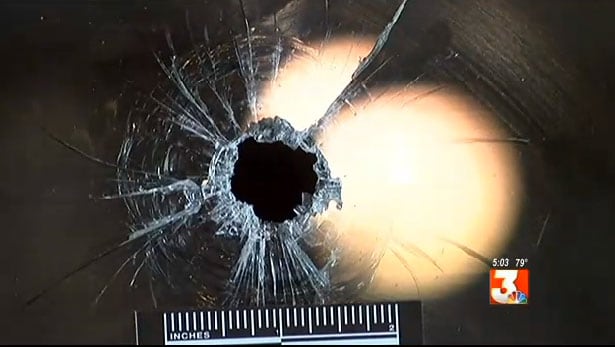 Bullet holes riddled the house, showing the exchange between the 17-year-old girl and her attacker. (Photo: MS News Now)

A mother and three children are lucky to be unharmed after a violent home invasion early Monday morning left the mother and her 17-year-old daughter tied up and at the mercy of the intruder in their Vicksburg, Mississippi, home before the daughter was able to get free and fight back.

Candy Strange told reporters that she woke up to a gun pointed at her head at about 5:20 a.m. Her 17-year-old daughter was also awakened, and a 7-year-old and a 2-month-old baby were in the home at the time as well.

Strange said the man, who was armed with a gun, forced the two women out of their bedrooms and onto the living room floor before tying up both of them. The man then stole two wallets and took off.

But Strange and her teen daughter were able to break free and the 17-year-old immediately went for a handgun, while her mother went to lock the door.

“I went after the door but you couldn’t get it shut,” Strange said.

And as she attempted to close the door, the suspect came back inside the house, this time firing his gun, but the teen fired back. The suspect chased the women into a back bedroom while the exchange of gunfire erupted and eventually fled the scene again.

Lt. Troy Kimble of the Vicksburg Police Department said that there was an exchange of about 15 to 20 shots. It didn’t appear that anyone was injured, but authorities are still on the lookout for the suspect, who is described as a black male, about six feet tall, with a thin build.

Although the family was unharmed during the incident, Strange said it will take time for them to feel safe again in their normally quiet neighborhood.

“It will be a long time before we don’t think about it constantly,” Strange said of the home invasion.