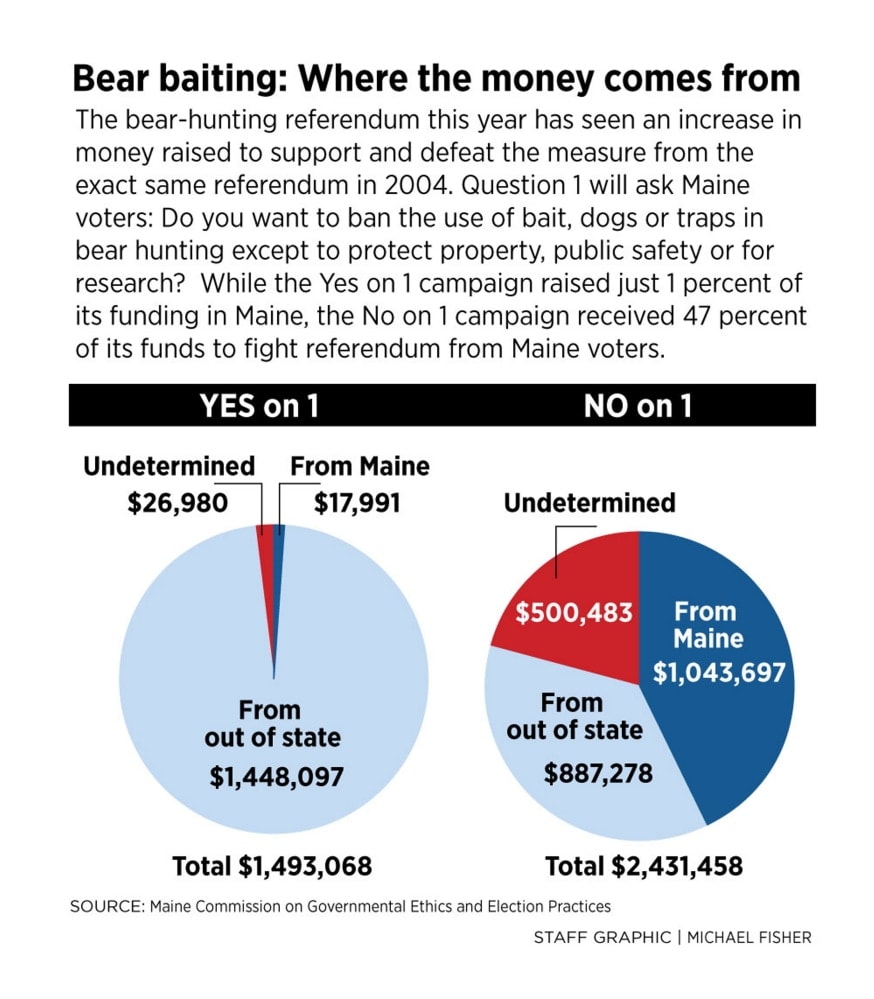 Most of the money behind the Question 1, which would curtail Maine’s bear season hunting methods, comes from out of state. (Image: Portland Press-Herald)

Backed largely by out of state donations, a group calling itself Mainers for Fair Bear Hunting is behind a ballot amendment that would change the traditional way bears are hunted in the Pine Tree State.

The group, allied with the Humane Society of the United States, earlier this year garnered enough signatures in the state to place the referendum, termed Question 1, on the upcoming general election ballot. While it would not end the harvest of black bear in the state, it would ban several of the methods used, including hunting over baited fields, using dogs and traps.

“We are excited to work with Maine hunters and non-hunters to ban the inhumane, unsporting and reckless practices of bear baiting, hounding and trapping,” said Katie Hansberry, campaign director for Mainers for Fair Bear Hunting and director of the Humane Society’s Maine chapter.

Hansberry continued, “Dumping millions of pounds of pizza, jelly donuts and rotting food into the woods – to lure in bears for an easy kill – is wildlife mismanagement at its worst, providing heaps of supplemental food for bears and training them to raid garbage and other human food sources.”

Question 1 will ask voters to choose yes or no to: “Do you want to ban the use of bait, dogs, or traps in bear hunting except to protect property, public safety or for research?”

According to the Maine Department of Inland Fisheries and Wildlife, the state has a growing population of black bear. Although hunters take an estimated 2,500 animals per year, this population has increased 67 percent since 1990 to over 30,000 today. As such, state employees including the DIFW’s bear program biologists have publicly opposed the ballot initiative, despite a legal attempt by the anti-hunting group to muzzle them.

As bear baiting accounts for an estimated 80 percent of the yearly harvest, the department is concerned that should it and other methods such as dogs and traps be prohibited, the population would soar, pushing more animals into residential neighborhoods looking for food.

“What I really don’t want is people’s primary interaction with a black bear to be that of a nuisance,” said Maine wildlife-division director Judy Camuso.

According to funding disclosures from the Maine Commission on Governmental Ethics and Election Practices, the money to fund Mainers for Fair Bear Hunting has virtually all come from out of state. Records show that of $1,493,097 reported in the group’s war chest, just $17,991 has definitively come from within the state itself.

Meanwhile a “No on 1” opposition campaign has raised more than $1 million from residents alone to add to donations from those outside the state. This windfall for those who would keep the current conservation methods in place is attributed by some as a response to the involvement by national groups inciting a response.

“The perception nationally is that (the Humane Society is) an anti-hunting group, not just on bear hunting, but all hunting,” David Trahan, executive director of the Sportsman’s Alliance of Maine told the Portland Press-Herald. “And people are worried in a state like Maine with deep roots in our hunting heritage if they win here, they can win anywhere.”

Question 1 is not the first time that theHumane Society and others have gone after bear hunting in the state. In 2004, a similar ballot referendum sponsored by the national organization then allied with the Maine Environmental Policy Institute was defeated in a narrow 53-47 margin.

Gun industry groups predict much the same outcome this time around.

“Despite sending over $1.5 million dollars the HSUS will again fail in its effort to end Maine’s cherished tradition of hunting bears, which is supported and appropriately managed by the wildlife managers at the Maine Department of Inland Fisheries and Wildlife, because hunters and sportsmen will stand tall on Election Day,” Larry Keane, National Shooting Sports Foundation senior vice president and general counsel told Guns.com.