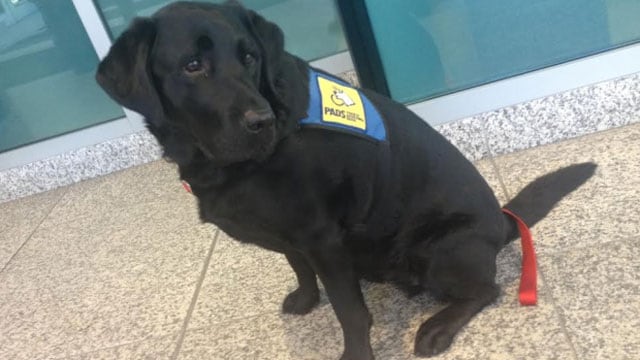 A four-year-old black lab who goes by the name of Hawk will stand alongside two young kids as they testify in an upcoming sexual assault case.

Hawk joined the Canadian Calgary Police Service as a victim assistance dog last year and the services he has provided in the past have been invaluable. Authorities said Hawk is able to connect with victims when his human counterparts are unable.

“In the last few years, there’s been a significant amount of cases from the U.S. where they’ve been using support dogs in court not only for child witnesses but vulnerable witnesses as well,” said Crown prosecutor Rose Greenwood, who supports the idea of having Hawk take the stand with the children.

In the upcoming case, a 7-year-old girl will testify against her father, who is accused of sexually assaulting her. The girl’s 9-year-old brother will also testify. But Hawk has been court-ordered to take the stand with the kids, providing comfort and helping them to relax while giving their testimonies.

“Anything we can do to make the justice system more open and we can create, as best we can, a comfortable, a confident witness — that aids in the success of our justice system. It’s very exciting,” said Sgt. Brett Hutt. “I love it.”

The kids have had two “play dates” with Hawk so the trio can get acquainted before the trial.