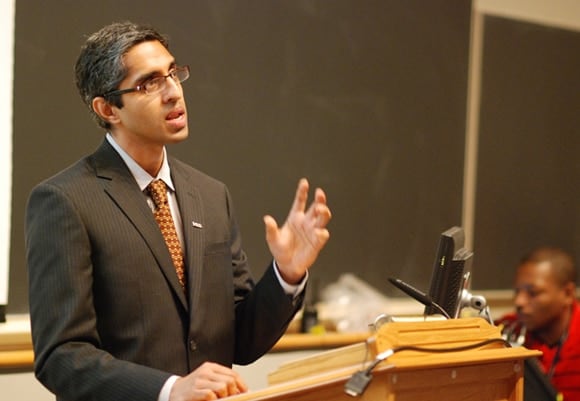 Surgeon General nominee Vivek Murthy has had his appointment on hold for nearly a year over anti-gun comments. (Photo: Yale.edu)

Some 91 House Democrats this week called upon the Senate to approve Vivek Murthy, criticized for his views on gun control, as the nation’s top doctor.

President Obama nominated Murthy last November to become the 19th Surgeon General of the United States. The British-born 38 year old, if confirmed, would be the youngest Surgeon General on record. However, his appointment was stalled after his commentary on gun control issues prior to his nomination became a source of heart burn for potential supporters.

The lawmakers are calling on Senate Majority Leader Harry Reid (D-Nev.) and Senate Minority Leader Mitch McConnell (R-Ky.) to quickly approve Murthy so that he could help keep at bay the specter of Ebola, now gripping the country.

“Given the public’s increasing fears regarding the spread of the disease, it is imperative that we confirm a Surgeon General who will play a significant role in educating the American public about the disease and how to best protect their health,” wrote the members in their plea to expedite Murthy’s nomination.

Gun rights groups argue that the better choice for the surgeon general spot as the nation girds itself to fight Ebola is the one already in the driver’s seat.

“Not only does America deserves better, it currently has better in the form of the acting surgeon general, Dr. Boris D. Lushniak , who has outstanding credentials to help manage America’s response to this or any other potential epidemiologic emergency,” wrote Larry Keane, National Shooting Sports Foundation senior vice president and general counsel in the organization’s blog.

Keane contends that Murthy  is relatively inexperienced compared to Lushniak.

“Dr. Lushniak began his distinguished medical career three decades ago with the Public Health Service and was steadily promoted through the ranks. He has worked with the Epidemic Intelligence Service of the Center for Disease Control, and with the Food and Drug Administration, as chief medical officer of the Office of Counterterrorism,” explained Keane.

“All politics, including the President’s brand of gun politics, should end at the surgeon general’s door.”