Did Iowa Senate candidate Joni Ernst threaten to shoot federal officials in the name of the 2nd Amendment? (VIDEO) 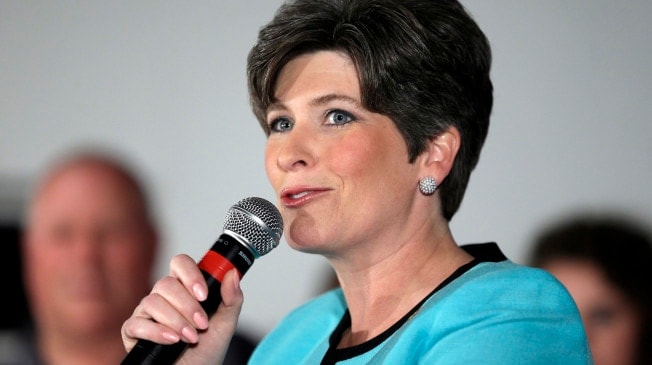 Republican Senate candidate Joni Ernst is taking heat for comments she’s made regarding the length she’s willing to go to protect her Second Amendment rights, which some argue could lose her the Iowa seat.

During a National Rifle Association event in 2012, Ernst said she would use a gun to defend herself against the government should it “decide that my rights are no longer important,” the Huffington Post reported.

Ernst told Talking Points Memo early this month that she supports legislation to allow Iowa law enforcement to arrest anyone trying to implement Obamacare in the state.

The comments were reminiscent, Maddow argued, of those made by Republican Senate candidate Sharron Angle in 2010 during her midterm bid.

“You know, if this Congress keeps going the way it is, people are really looking toward those Second Amendment remedies. They’re saying, ‘my goodness, what can we do to turn this country around?’” Angle said on the Lars Larson Show.

Angle ran against Democratic Sen. Harry Reid in Nevada and lost, much to the dismay of the GOP, who Maddow said threw a “ton” of money in to back the Republican candidate.

“It wasn’t so much that Harry Reid won that Senate race in 2010, it was that Sharron Angle lost that race,” Maddow said.

“Since that huge Republican disappointment in the last midterms in 2010 — the way they blew it with the Senate candidates like Sharron Angle — the republican Party has been really desperately trying to avoid having another candidacy like that,” Maddow said.

Running in a tight race against Democrat Bruce Braley this election cycle, Ernst has  denied interviews to the editorial boards of the state’s three largest newspapers, which was likely a deciding factor in why the papers decided to endorse Ernst’s Democratic contender, Maddow argued.

According to a Quinnipiac poll released Wednesday, however, Ernst is favored by 49 percent of likely voters to Braley’s 45 percent. Five percent of voters were undecided.

As of the Oct. 15 filing period for campaign finance disclosures, Ernst has raised some $9.95 million to Braley’s $10.8 million. Braley has not only out-fundraised Ernst by more than $850,000, but he’s also spent about $2.4 million more than the Republican candidate.

The NRA has put a meager $13,394 into the Ernst campaign, but spent some $2.84 million against Braley, according to the Center for Responsive Politics.