Guns are not a health care issue

Vivek Murthy’s nomination to become Surgeon General now has mythical status. It is the Obama nomination that will not die. Or, it’s at least a zombie nomination, because it was dead, but it comes coming back to life. Harvard physician Murthy, gun owners may recall, was originally nominated in the fall of 2012 to serve as this bureaucratic anachronism, and on October 16, 2012 famously tweeted:

Thanks to advocates for the right of self-defense, Murthy’s nomination was tabled. But, under cover of needing a Surgeon General to deal with ebola, both self-defense opponents and the mainstream media are clamoring for the Senate to allow a vote.

Setting aside that the position is obsolete, redundant, and has been unoccupied since 1989 by anyone with the integrity of C. Everett Koop, it is assumed this public office will act as a megaphone for the administration. Don’t we have enough political appointees who live for the echo chamber?

A few points of clarity from this public health professional who believes, firmly, that the public health establishment is all wrong on guns.

Guns are, first and foremost, not a health care issue, but a Constitutional issue. Every conversation about this clearly articulated right must happen in this framework. Lots of things get labeled health care issues, but there isn’t another one that is actually articulated in the document that is the nation’s legal foundation.

Of all the gun deaths in the U.S., two-thirds are suicides. These people need help; the health care system’s inability to find a way to open doors for them is a national travesty. I am the son of the deeply mentally ill father who was effectively ignored by the medical care industry until he developed lung cancer, which was a far more profitable disease.

The homicide rate in the U.S. has been in a steady downward trajectory for over 20 years along with the overall violent crime rate. In fact, it has dropped by more than half since 1992, and the homicide rate by firearms has fallen faster and farther than homicide by other weapons quite independent of attention from the nation’s “chief doctor.” Homicide is a problem of criminality and demographics. Before demonizing law-abiding gun owners and stigmatizing their non-criminal behaviors and choices, maybe we should do away with state parole of violent criminals, beef up their mandatory supervision after release, and concentrate on the demographics of people who commit or are likely to commit crimes.

As David Kennedy, a Professor of Criminal Justice, points out, (abstracting from here): ‘A closer look at the social networks of neighborhoods most afflicted,… often shows that only a small number of men drive most of the violence. Identify them and change their behavior, and it’s possible to have an immediate impact.’

It is time for health professionals to give the right of self-defense its due: for hundreds of thousands of years, long before we conceived of a right to health care or even the right to vote, humans have relied upon the right of self defense to ensure their safety and survival. It is inconceivable there is any more fundamental human right with a longer history.

In fact, in 2013, the Institute of Medicine (IOM) released a report on firearms that openly and clearly acknowledges the defensive use of firearms is significant, understudied, and a much bigger crime deterrent than anyone believes it to be. This report has been universally ignored because it did say what self-defense opponents wanted it to say. I wonder what the people of Tibet, Ukraine, and the Kurds, think of the American left’s fashionable dismissal of the right of self-defense.

I’ll tell you a health care issue that merits attention from the Surgeon General (if we really must have one): the health care industry.

In 1999, the IOM told Americans that the health care system was killing nearly 100,000 of us each year through medical errors. Fast forward to 2010, and the Inspector General of the Department of Health and Human Services reports that medical errors kill 180,000 Americans each year, and that’s just elderly and disabled people on Medicare. Models developed by other researchers say that the actual figure might be as high as more than 400,000 deaths, or about 16% of 2.5 million deaths in the U.S. in 2010. Thus, the medical care system in 2010 killed people at least twice as frequently as it did just 11 years earlier, although during that time the population grew by only 14% (from 272 million to 310 million). And, based on this, our health care leaders conclude they should turn their attention to guns?

Physicians are giving chemotherapy to people who do not have cancer, because our lunatic healthcare system pays them fabulously for doing so.

Medical groups are using loopholes in federal law to bamboozle patients into getting diagnostic testing from which the medical groups profit hugely, but offer little benefit for the patients, many of whom are desperately sick and even fatally ill.

A physician in California thought it was a friendly gesture to burn his patient’s name into organs he had removed from her body.

An orthopedic surgeon openly brags about making $300,000 each year from x-rays ordered for his patients, using x-ray equipment he owns. Funny, however, he writes not a single word about how those x-rays improved outcomes, optimized therapy or management, or got people back to work sooner, which raises some serious questions about whether they were a contribution to care or the bottom line.

Oh, and lest Vivek forget, all that unneeded radiation is actually a killer. In data just released, researchers estimate that unnecessary exercise stress tests with radiation imaging account for half a billion wasted dollars and 500 cases of cancer each year.

I would love to support Vivek’s nomination to be Surgeon General if he resolves to devote his many self-proclaimed academic and entrepreneurial talents to cleaning his own house, instead of telling me what I can or cannot keep in mine. 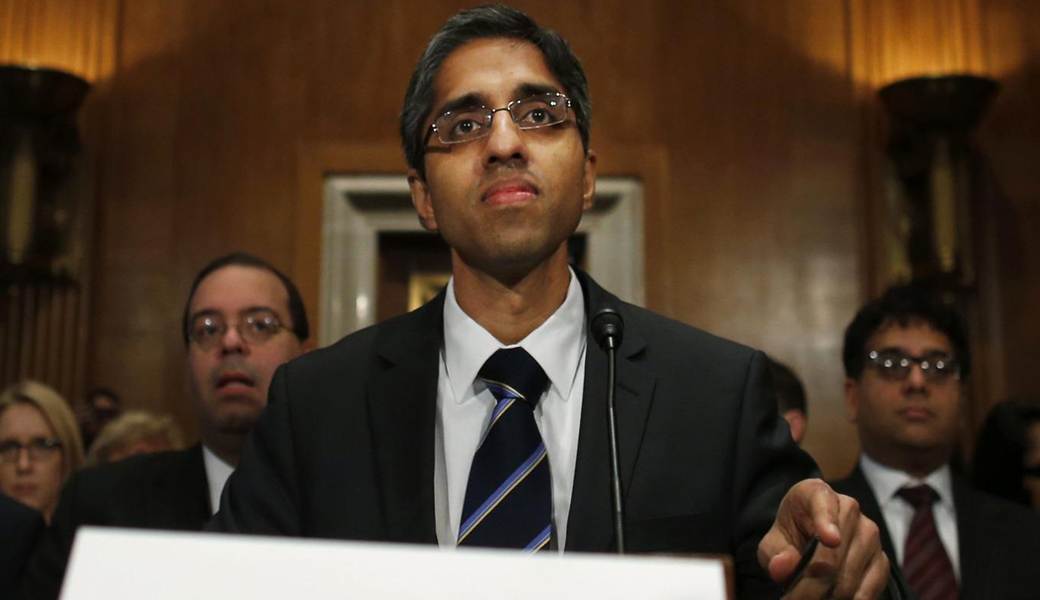 Vivek Murthy was nominated by President Obama for the post of United States Surgeon General in November 2013. He has come under attack for his support for an assault weapons ban and a Twitter posting where he wrote, “Guns are a health care issue.”

At a time when people like Vivek Murthy and other Obamacare apologists keep telling us we are going to get health care policy based on evidence, it is ludicrous that someone who aspires to be the “nation’s” doctor won’t speak to this fundamental fact: the industry that is physically and fiscally mauling Americans is the health care industry, promoted and supported by a complicit federal government that cares not one whit about population health, but is in punchdrunk pursuit of law-abiding individuals and their right to be left alone.

I’ll be exploring more of these themes in the future. But, in the meantime, remember this: Election Day is upon us. If you think midterm elections don’t matter, or that President Hillary couldn’t be worse than what we have now, consider these two nightmare scenarios: Mr. Justice Holder, and, after 2016, Mr. Justice Obama. Get out and vote. The country’s future is literally at risk.

Vik Khanna is a health care consultant, writer, and gun owner in St. Louis, MO. He is an active member of Doctors for Responsible Gun Ownership, a project of the Second Amendment Foundation. His new e-book, Your Personal Affordable Care Act: How To Avoid Obamacare, is available now here and at Smashwords.com.

The views and opinions expressed in this article are those of the authors and do not necessarily reflect the position of Guns.com.