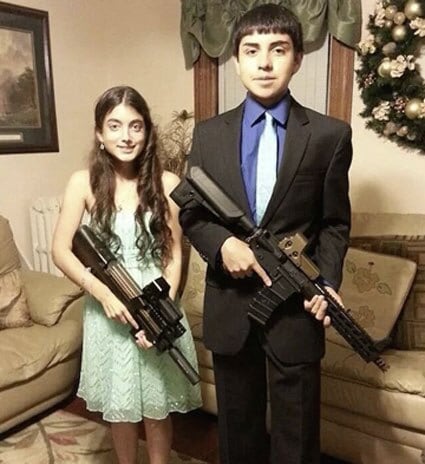 One might argue that the teens were going for a Bonnie and Clyde kind of look. (Photo: Facebook)

Two students have been suspended for 10 days and are facing possible expulsion from a Taunton, Massachusetts, high school after they posted a picture of them holding airsoft rifles on Facebook Friday.

Tito Velez and his girlfriend, Jamie Pereira, were dressed in formal attire and about to go to the Bristol Plymouth Regional Technical School’s annual homecoming dance when the photo was taken at Tito’s house by his father.

According to a local CBS affiliate, Velez later posted the photo to his Facebook page with the caption “Homecoming 2014.”

Superintendent Dr. Richard Gross said it was the caption, not so much as the content, which landed the kids in trouble.

“To tie that to one of our school events kind of puts it over the top which brings us into it,” said Gross, who also added that had they known about the photo on Friday, the school would have canceled the homecoming dance.

“They know it’s wrong in this day and age to do something that can only be provocative and will upset and excite other students,” Gross told the Taunton Daily Gazette. He added, “To do that is just foolish.”

Unbeknown to the teens, the photo was taken on the same day that a high school student opened fire at a Washington high school, killing one and seriously wounding four others, before turning the gun on himself.

The teens didn’t think about the photo having such a negative impact.

Tito, who participates in sporting competitions with his airsoft rifle, said they simply wanted to “do something unique and different instead of using flowers like everyone else” when they took their homecoming photos.

“They had no intention of getting anyone excited,” said Jamie’s father, Jailes Pereira.

“I get it,” Pereira said. “But they (his daughter and Velez) were not thinking.”

Nonetheless, Gross added, “These are not little kids. They are 11th-graders who know better.”

Pereira said his wife found the photo on Facebook and immediately contacted him about it. Pereira, in turn, contacted Tito’s father and suggested the boy remove the photo from the internet. Tito removed the photo, but the damage was already done.

“If you do stuff that upsets your peers and colleagues there will be consequences,” Gross said.

The teens were informed on Monday that they would be suspended for 10 days and possibly face expulsion, pending a decision by the school board.

“I understand, but I think they took this way too far,” Jamie said. “Suspending us for 10 days and possible expulsion is way too much.”

Gross said local media response – pressing for interviews and photos – has been unreal and also claims, “We even got a call from the (Airsoft) gun manufacturer complaining that we were punishing them.”