Coroner set to auction off guns recovered from suicides 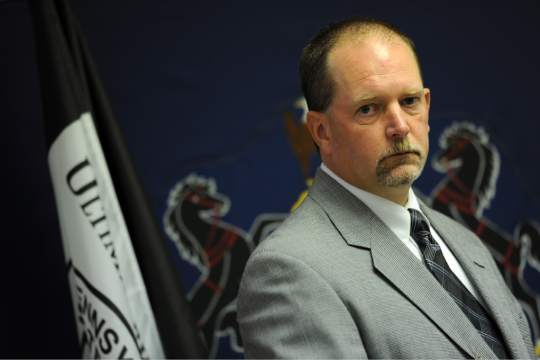 Westmoreland County Coroner Ken Bacha is selling a pile of guns that have been collected by his office over the past three decades. (Photo: Triblive.com)

A Pennsylvania coroner is holding a public auction for nearly 100 guns collected on the job, mainly from suicides, over the past 30 years.

Westmoreland County Coroner Ken Bacha said the auction — the first his office has held in decades — is to rid itself of guns that have been accumulating over time. With the coroner’s office moving to a new location, he felt like it was a good time to get rid of the excess property and start over.

Bacha is very candid that the guns up for sale were primarily recovered from those who took their own life. In many accidental deaths, the guns are reclaimed while the police retain those from homicides, leaving the firearms of the self-terminated to stack up.

“These are probably mostly all suicides,” Bacha told Guns.com Thursday. “There might be a couple that are from accidental deaths, but none of them are from homicides — I do know that for sure.”

The reason the coroner has the guns in the first place is a quirk in Pennsylvania law.

“By our state statutes, the coroner is empowered to take possession of anything that is on or about the body,” said Bacha, who was elected to the job in 2001. “That can be wallets, cell-phones, things of all sorts. We’d confiscate the gun. We’d store it. The family would have up to a year to claim the firearm, or any of the property for that matter. After that, by state statute, we have to put it up for public sale.”

In the case of Westmoreland County, these guns are something of an inherited problem. “I’ve been the coroner for 13 years. My dad before me was the coroner for 24 years. When he first got in office, which was in 1978, he had a bunch of firearms that he inherited from his predecessor,” he said.

This led Bacha’s father to hold the last auction for surplus guns some three decades ago. At that event, an odd thing occurred.

“People were paying exorbitant prices for a little .25 automatic that probably sold for about a $100 bucks brand new back then, they paid $200 bucks for. I don’t known if it’s the morbidity of it or what,” he said.

The guns at the upcoming auction, some 97 in total, include a wide variety of firearms ranging from an Enfield Tanker in .38/200 British with electrical-tape grips, to a sporterized Hungarian FEG 35M bolt-action rifle.

Many of the firearms are inexpensive guns, with a number of pre-1968 pistols by H&R, Proctor, Iver Johnson, RG, U.S. Revolver Co, and the like among the most common names seen on the list. However there are a number of higher-end guns including an Interarms-imported Walther PPK and at least two collectable 1900s-era Colt New Police .32 revolvers.

Nearly a third of the firearms are .22 rimfire while other chamberings range from 16 gauge to .308 and 7.65 Mauser.

Since the news of the rarely held auction broke, Bacha says he has been fielding calls from all over. Nevertheless, he points out they are mainly from the media and interested firearms collectors and hasn’t received any criticism. Self-described as “not your typical Democrat,” he says that he is an avid hunter and gun owner himself.

Scheduled for Nov. 7, the auction terms are cash and credit cards only, no checks.

As for the proceeds, Bacha said, “It will go back into the county general fund.”