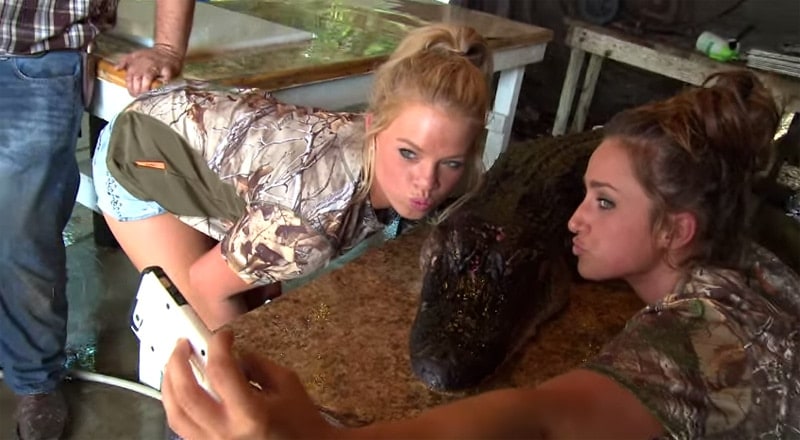 Spoiler! Kendall Jones, left, and her friend,, Taylor Altom, kill an alligator at the end of the episode. (Photo: Youtube/screenshot)

The goal is to attract a younger, more engaged audience and it sounds like “Kendall Jones: Game On” did just that.

The views were split almost evenly between Youtube and Facebook, which is significant because Youtube videos can host ads while videos posted directly Facebook cannot. The show, however, is sponsored by Remington, so the goal is exposure rather than revenue.

In the first episode, Jones and her friend, Taylor Altom, hunt alligators in Louisiana. At the beginning of the show they discuss the merits of their .22-caliber Remington rifle, which they use to later kill a gator.

“We wanted to do a digital production knowing the unique audience that follows me are those who are more inclined to watch a shorter YouTube clip than sit in front of the TV for a 30-minute show,” said 20-year-old Jones in a press statement.

The “unique audience” refers to the age group 13 to 34, which made up 71.3 percent of the episode’s entire audience. Also, roughly the same percentage, 72 percent, of the audience watched the show in its entirety — more than 11 minutes.

Over the summer, Jones gained national attention after posting a photo gallery on Facebook of her posing with trophy kills she made during African hunting trips. The gallery ignited a public outcry, but she also gain support, nearly 700,000 Facebook fans.

It has not been announced when the next episode is slotted to air.