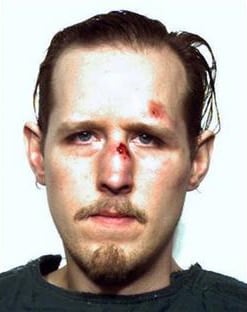 The man Pennsylvania state troopers suspect of killing and wounding two of their own in a strategic ambush last month had his preliminary trial set by a judge Friday morning, after being captured the night before.

Police brought in Eric Frein, 31, without firing a shot, after discovering him in an abandoned airplane hangar in the Pocono Mountains. He surrendered without incident.

Perhaps ceremoniously, the suspect at one point was placed in the handcuffs of the state trooper he allegedly shot and killed, Cpl. Bryon Dickson, during the Sept. 12 attack on the police barracks in Blooming Grove, the Associated Press reported. It’s unclear whether Frein was put in the cuffs at the point of capture.

Frein triggered a statewide manhunt that lasted seven weeks as police combed the forested landscape for the suspect, a known survivalist and gun expert.

Though police didn’t discover a motive during their initial interrogation of Frein, the suspect did make anti-law enforcement comments online to his friends, police said.