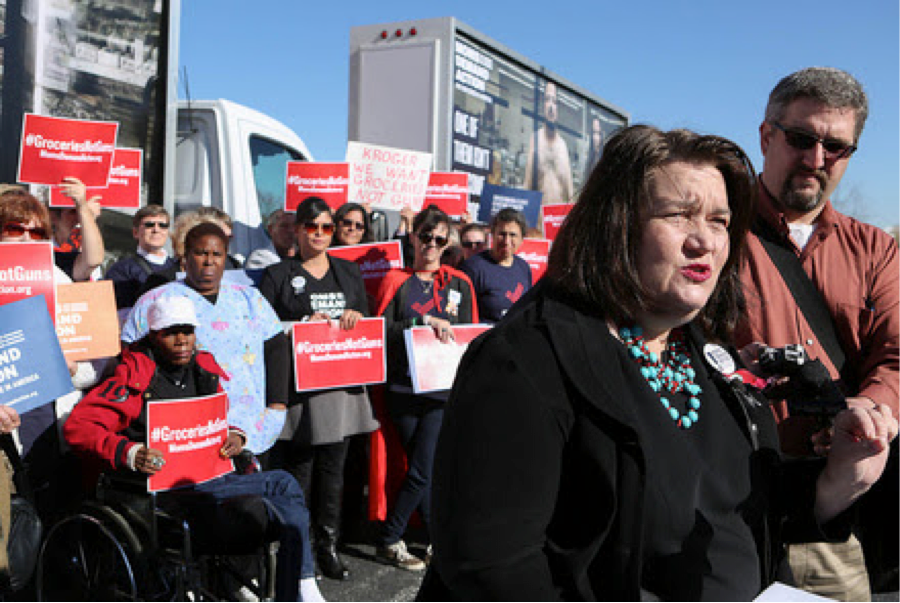 A planned protest against open carry at Kroger’s annual investor meeting Wednesday drew 40 to 60 supporters, a thank you note counter-protest, and the ire of a conservative talk show host.

The event, sponsored by Moms Demand Action, was designed to call the supermarket chain to task for its perceived disinclination to adopt a storewide policy against customers who open carry firearms otherwise in accordance with state and local laws.

According to local media, about 40 protesters gathered outside the Northern Kentucky’s METS Center, where the nation’s top supermarket chain was holding its meeting. The protest was preceded by a large ad buy on local radio stations from the Moms.

“Our ads are nothing more than Kroger employees reiterating Kroger’s policy, which is to prohibit children’s toys and household pets in the name of customer safety, but to allow anyone to openly carry loaded firearms, even though no permit, training or background check is required to do so in most states,” said Shannon Watts, founder of Moms Demand Action in a release after the event.

The group said it puts the number of participants at closer to 60. Among those attending was Mary Reed, a survivor of the 2011 Safeway grocery store parking lot shooting in which former U.S. Rep. Gabby Giffords was wounded.

“As a gun owner and a gun violence survivor, I want Kroger leadership and its investors to know open carry is bad business, and beyond that, it’s just plain dangerous,” Reed said.

While Kroger has not issued a statement on Wednesday’s protest, they have directed media to its established policy on open carry.

The safety of our customers and associates is one of our most important company values. Millions of customers are present in our busy grocery stores every day and we don’t want to put our associates in a position of having to confront a customer who is legally carrying a gun. That is why our long-standing policy on this issue is to follow state and local laws and to ask customers to be respectful of others while shopping. We know that our customers are passionate on both sides of this issue and we trust them to be responsible in our stores.

Actively opposing the event was a local gun rights group, Ohio Carry, that, rather than direct members and Second Amendment supporters to the protest that could have sparked a media incident, asked that those wishing to make a pro-gun statement head to their local Kroger and give the store manager a thank you card. In addition to this, they asked members to shop the store and post pictures of their receipts. 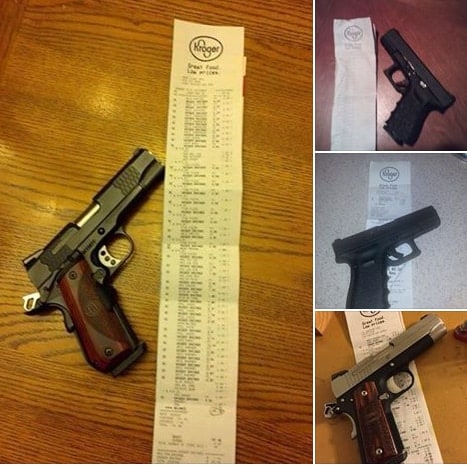 A gun rights group asked its members to tell local Kroger managers,”thank you” and post their receipts to Facebook to counter-protest the Moms group. (Photo: Ohio Carry)

“We had over 100 participate and posted up about 15 of the picture receipts people took,” Ohio Carry President Brett Pucillo told Guns.com Thursday. “We had the store manager in Cincinnati tell us that that was the busiest Wednesday he can remember and was wondering what was going on.”

A handful of open carry advocates did appear at the Moms rally, but they were not associated with Ohio Carry.

Meanwhile outside of the state, conservative talk show host Dana Loesch was quick to draw attention to apparent armed security used by the Moms group at the rally. Loesch posted pictures to her website pointed out by a twitter user of suited, sunglass-wearing men similar to those seen at a protest earlier this year at the National Rifle Association annual meeting in Indianapolis.

At that event, Loesch maintains one of these men “hip-checked” her while she was attempting to talk to Watts.

“So wait — Bloomberg anti-gun lobbyists show up with guns to bully Kroger into banning guns? Moms Demand thinks that they’re absolved because they paid other people to carry guns and they themselves aren’t carrying?” wrote Loesch.