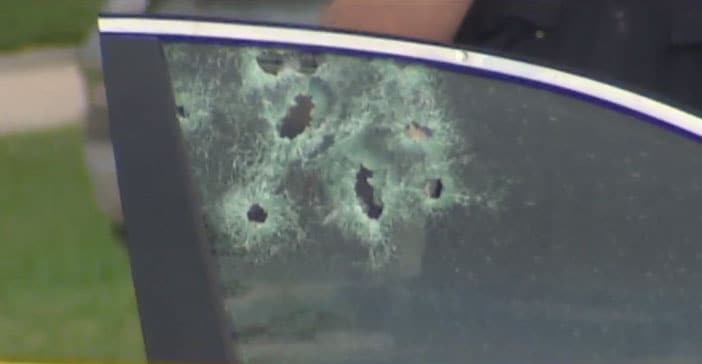 The suspects’ getaway car, which was later discovered to be stolen, was riddled with bullet holes. (Photo: KHOU)

Two women are in critical condition after getting shot while attempting to break into an Atascocita, Texas, home Wednesday just after noon.

The two women initially knocked on the front door of the home, but the homeowner, who is a retiree in his 60s, said he never answers the door during the day. But according to a report by KHOU, when the homeowner failed to answer the door, the two women began throwing rocks at the windows near the door.

The homeowner made two calls to 911 to report the break-in, but before police responded, the women had broken the window glass and reached inside to open the door. The homeowner then responded with a shotgun and opened fire on them both.

One woman was shot in the doorway to the home, while the other woman collapsed as she ran across the lawn. Both women were struck in the upper torso.

When authorities arrived the women were airlifted to the hospital. One woman remains in critical condition, while the other is listed in stable condition. According to The Humble Observer, both women are expected to survive, but will likely have life-changing injuries. One suspect, believed to be in her mid-20s, underwent surgery but suffered a spinal cord injury and may be paralyzed. The other suspect, who is said to be 17 years-old, also underwent surgery and may lose an arm.

The incident is still under investigation, but at this point authorities said they believe the shooting was justified. Some neighbors agree.

“You break into someone’s house, I believe you deserve to get shot,” said neighbor Derenda Carr. “Cops don’t get there in time; there’s no way they would’ve got there in time.”

Jennifer Lechner, who lives nearby, said she had seen the women in the neighborhood before the break-in occurred.

“I saw the car this morning patrolling up the road, and I actually looked for a cop to warn him about the vehicle,” Lechner said. “I just saw how slow they were going, and the driver’s side door was kind of open.”

Authorities later discovered that the vehicle driven by the women, who were not from the area, was reported stolen.