Plink a tune with these Musical Targets (VIDEO)

Every shooter loves the sound of ringing steel but Musical Targets is taking it to the next level with these awesome laser-cut, tuned target sets that start at just $249.

Musical Targets offers three different sets for gunpowder percussionists, the Major 8 Chime set, the Major 8 Gong set and the Double Major 16 Deluxe set, which is a full set of chimes and gongs.

The Chime set is the entry-level package with the Gong set running $399 and the Deluxe package priced at $599. The Chimes and the Gongs each offer a different major octave and the Deluxe set includes both. 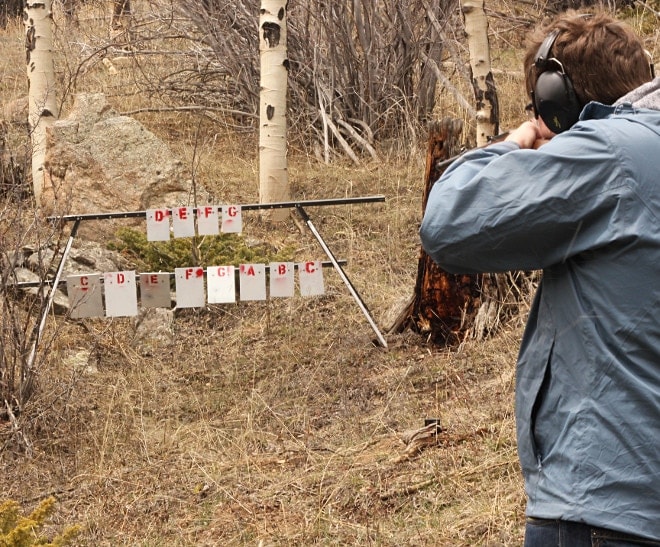 Making music up with the aspens. (Photo:Musical Targets)

Every set comes with all the equipment needed to mount the targets including hangers and vibration isolators to keep the ringing short and more instrumental. Musical Targets even throws in a few spares to address the inevitable shot hanging pin.

The sets also come with stencils to re-paint the targets with notes and a beginner’s song pack for people who may not be new to shooting but are new to making music.

It’s not hard to see what motivates the crew at Musical Targets to make these melodic target sets, and in their own words, they “simply wanted to add more enjoyment into the shooting world. We love how popular target shooting has gotten in recent years through YouTube and other internet communities, and we thought, why not add another layer of challenge and excitement to the sport?”

Musical Targets are constructed out of tuned plates of AR500 steel and are intended to be shot with rimfire guns, namely .22 Long Rifle handguns and rifles and will last for tens of thousands of rounds if you stick to plinkers.

They can be shot with centerfire handgun cartridges but Musical Targets doesn’t really recommend anything more than a little 9mm here and there. They’re musical instruments, after all, and anything over .22 is hard on the hangers and they will need to be replaced more frequently. And if you try to play them with an AR-15 you’ll probably end up with more than a few F-holes.

Currently Musical Targets aren’t meant for use with any centerfire rifles but they’re working on another, beefier set for rifle enthusiasts down the line. They also have plans to carry target stands made specifically for their Chimes and Gongs.

Musical Targets aims to keep a handful of sets in stock but because they’re new and growing fast orders can take up to four weeks to fill, although their goal is to get turnaround times down to about a week. Sets are fabricated to-order when they’re not in-stock and that takes a little time.

The company is also planning a few demonstrations of their targets in person starting in the Denver and San Diego areas.

If you’re interested in putting a tune to your range head over to Musical Targets to order a set of Chimes, Gongs or both.