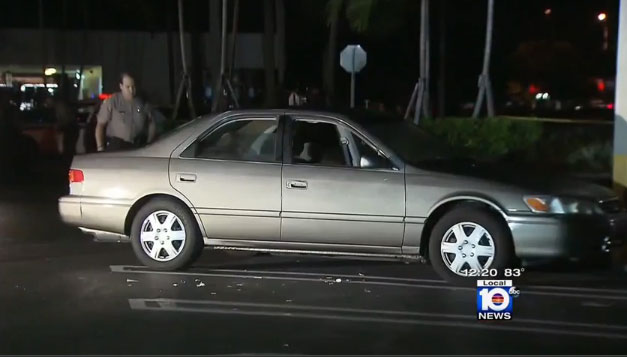 The suspect had smashed the passenger side window and cracked the back glass on the car before Harris pulled out his handgun. (Photo: ABC)

One man is dead after he was shot while attempting to attack another man with a tire iron in the parking lot of a Miami-Dade grocery store late Thursday night.

A local ABC affiliate reported that the two men involved, later identified as Eric Harris and Juan Agriel, were in separate cars outside of the Winn-Dixie when an argument erupted just before 11 p.m. It’s unknown what the men were arguing over or whether they were previously acquainted.

But according to authorities, the argument escalated when Agriel pulled a tire iron out of his car and apparently began smashing Harris’ car before attempting to attack Harris. Harris, fearing for his life and possibly the life of the woman who was with him, responded by pulling a handgun and shooting Agriel.

Harris then called the police to explain what had occurred.

When officers arrived, Agriel was transported to a local hospital, where he died a short time later. Harris and the woman who witnessed the attack were taken into police custody for questioning and were released early Friday morning.

Officers returned the couple to their car, where their dog had been waiting.

Ralph DeCastro, who lives in the area, told reporters he had seen Harris’ vehicle in the parking lot about a week prior to the incident. DeCastro said the car was completely full of stuff and it appeared to him that maybe the family was homeless and had been living in their car in the parking lot. Authorities later confirmed that Harris is, in fact, homeless.

Reporters attempted to make contact with Harris when he returned to his car, but he declined to comment, and only said, “No, I don’t know anything. Bye, have a nice day.”

Authorities said no charges have been filed against Harris, but the decision will ultimately land on the state attorney’s office. However, at this time the shooting appears to have been in self-defense.