Justice Department turns over 64,280 pages of 'Fast and Furious' documents 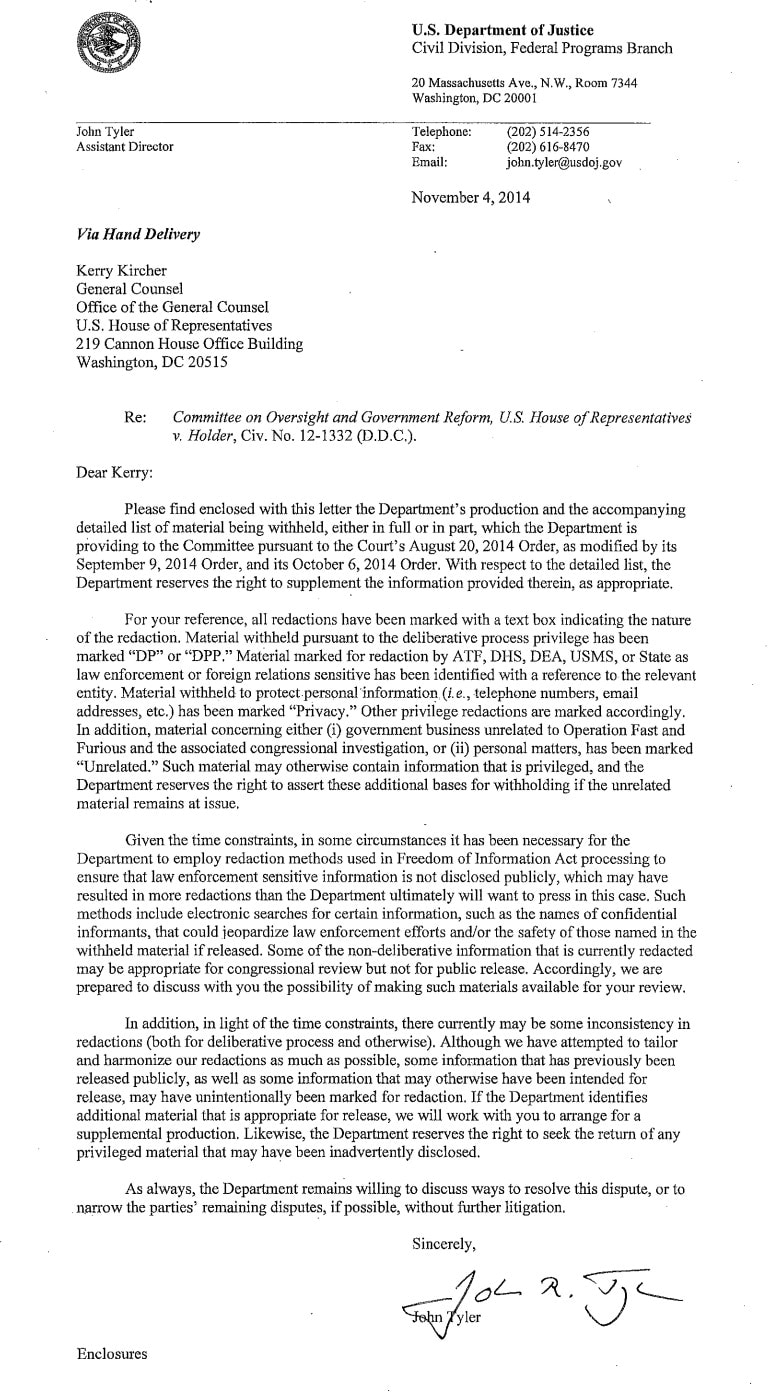 The cover letter included with the judge-ordered documents. (Photo: Committee of Oversight and Government Reform)

The Department of Justice, as ordered by a U.S. district judge, turned over 64,280 pages of documents pertaining to Operation Fast and Furious to the House Oversight and Government Reform Committee.

This is a major breakthrough in the investigation of the controversial “gunwalking” scandal that transferred as many as 2,000 guns to drug traffickers in Mexico. The investigation started in 2011 after whistleblowers tied the guns to the death of Border Patrol Agent Brian Terry as well as others in Mexico.

Committee Chairman Darrell Issa, R-Calif., has lead the charge for nearly four years to bring to light evidence of illegal actions and subsequent attempts to conceal them from the public.

The committee’s statement is clear. “The President and the Attorney General attempted to extend the scope of the Executive Privilege well beyond its historical boundaries to avoid disclosing documents that embarrass or otherwise implicate senior Obama Administration officials.”

“When Eric Holder wants to know why he was the first Attorney General held in criminal contempt of Congress, he can read the judge’s order that compelled the production of 64,280 pages that he and President Obama illegitimately and illegally withheld from Congress,” Issa said.

Given the sheer volume of the documents it will like take the committee some time before they can move forward with the investigation. They have also indicated that there the documents are overly-redacted, but they will start with what they were given immediately.

“Since these pages still do not represent the entire universe of the documents the House of Representatives is seeking related to the Justice Department’s cover-up of the botched gun-walking scandal that contributed to the death of a Border Patrol agent, our court case will continue,” Issa said.

“I am deeply concerned that some redactions to these documents may still be inappropriate and contrary to the judge’s order in the case. This production is nonetheless a victory for the legislative branch, a victory for transparency, and a victory for efforts to check Executive Branch power.”

The Justice Department has said that they will work with the committee with requests for any non-sensitive information that may have been unintentionally redacted.

“There currently may be some inconsistency in redactions (both for deliberative process and otherwise). Although we have attempted to tailor and harmonize our redactions as much as possible, some information … may have unintentionally been marked for redaction,” said John Tyler, an attorney with the Justice Department.

“As always, the Department remains willing to discuss ways to resolve this dispute, or to narrow the parties’ remaining disputes, if possible, without further litigation.”