The midterm elections came up in favor of the Republicans with GOP candidates winning a majority in the Senate as well as capturing and maintaining key gubernatorial races while a controversial background check initiative in Washington State was approved by voters. 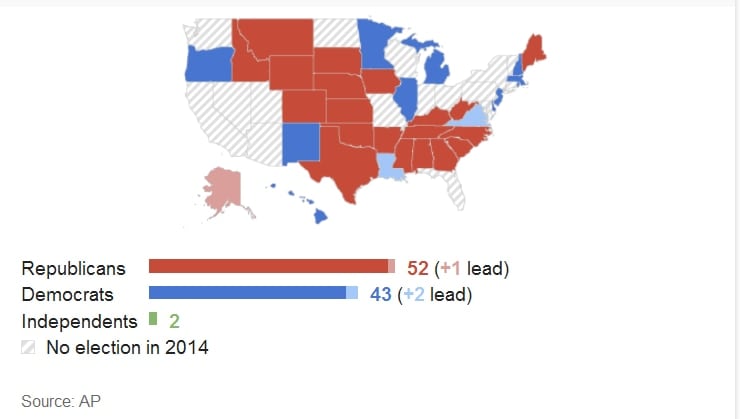 Control of the Senate swung to the Republican Party (Graphic: AP)

The biggest fights of the election cycle in many cases were in the campaign for the U.S. Senate. Of the 100 senatorial seats, 36 were up for grabs Tuesday.

Entering the election, the Democrats held a slim 55 to 45 majority with Sen. Harry Reid, D-Nevada in the driver’s seat.

By Wednesday morning, it seemed that the new Senate Majority Leader was likely to be Sen. Mitch McConnell, R-Kentucky, who won his much-contested seat.

Overall, it would appear that the GOP, which needed a six-seat pickup, got seven, to give a very slim majority in the senior chamber.

Republican candidate Tom Cotton bested incumbent Sen. Mark Pryor in Arkansas, a centrist Democrat who had held a B rating from the National Rifle Association, which grades candidates from a scale of A to F on support for Second Amendment issues.

A hard-fought campaign in Colorado between current Democratic Sen. Mark Udall, who was D-rated by the NRA, and Republican Rep. Cory Gardner ended up with Gardner on top.

Controversial Republican candidate Joni Ernst grabbed a senate seat of her own in Iowa, sending U.S. Rep. Bruce Braley, an F-rated Democratic candidate squealing. Ernst, picking up the seat of retiring Sen. Tom Harkin (D), will become the first woman elected to the Senate from Iowa.

In Montana the move by long-term Sen. Max Baucus (D), who is retiring from Capitol Hill to become Ambassador to China, created the chance for Republican candidate Steve Daines to turn the seat red for the first time since 1913. Daines easily beat NRA F-rated Democrat Amanda Curtis for the seat last held by a Republican in the administration of President Woodrow Wilson.

Sen. Kay Hagan (D), the junior senator from North Carolina, lost her re-election bid to state House Speaker Thom Tillis (R). Tillis, the NRA-endorsed candidate, held a strong A+ rating from the gun rights group while Tillis, who voted for the Manchin-Toomey background checks among other bills in the Senate, held a D+ rating.

South Dakota GOP alumni Mike Rounds bested current Sen. Larry Pressler (I) and Dem candidate Rick Weiland, both of who were given F ratings by the NRA.

Shelley Moore Capito (R) in a hard fight to pick up Sen. Jay Rockefeller’s (D) vacated seat in West Virginia, becoming the first female senator from the state as well as the first Republican since the 1950s. Capito, a current U.S. Congressional representative, was the NRA-endorsed candidate with an A rating.

Meanwhile, Sen. Mary Landrieu (D), another Democratic lawmaker fighting an uphill battle over past Manchin-Toomey support, is facing a run-off election in December after only garnering 42 percent of the vote in Louisiana polls. The ticket in the Sportsman’s Paradise was hopelessly split with no less than eight names on the ballot. Landrieu, who holds a D rating from the NRA, will face off against A-rated Republican challenger Bill Cassidy, who picked up 41 percent of the votes cast.

Senate races in both Alaska and Virgina, where incumbent Democrats are facing fierce opposition by Republican rivals, are too close to count as of Wednesday morning. Should a GOP victory arise from either, it would further entrench the party’s new-found control of that chamber.

In the House of Representatives, the Associated Press reports that Republicans will not only retain control there, but increase their margins to a level not seen since the days of President Truman.

“We are humbled by the responsibility the American people have placed with us, but this is not a time for celebration,” House Speaker John Boehner, R-Ohio, said in a statement. “It’s time for government to start getting results and implementing solutions to the challenges facing our country, starting with our still-struggling economy.” 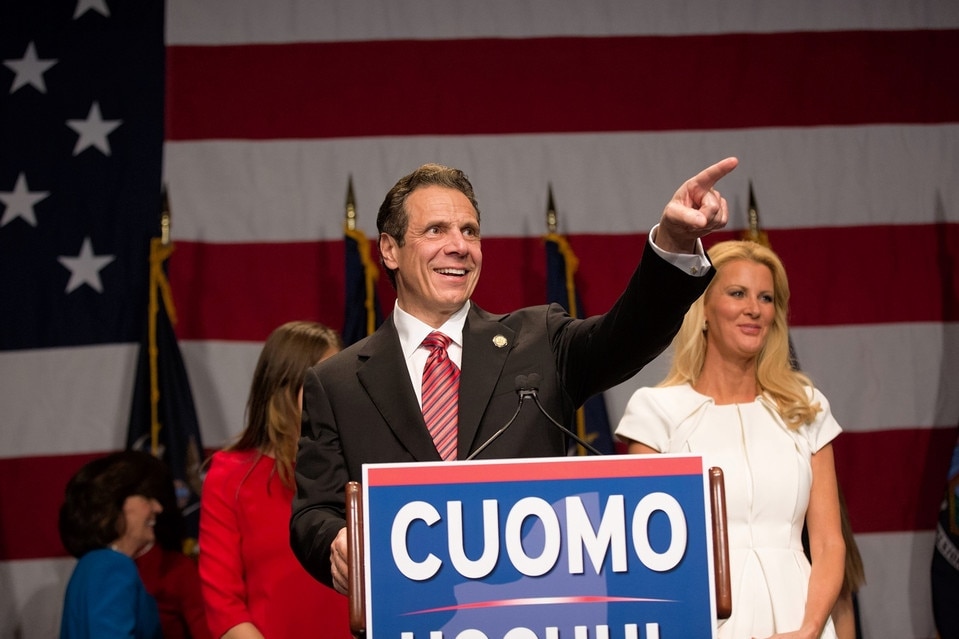 A number of bitter races for state executive spots had gun control as a major campaign issue. These included challenges to incumbent New York Gov. Andrew Cuomo, Connecticut Gov. Dannel Malloy and Colorado Gov. John Hickenlooper, all democrats who had signed off on strict post-Newtown gun control legislation in 2013.

Of the three, both Cuomo and Malloy won close but decisive reelection victories.

Hickenlooper, facing a nail biter with Republican challenger Bob Beauprez, who holds an A rating from the NRA, is too close to call. A number of pro-gun organizations including the National Shooting Sports Foundation helped fund ads against Hickenlooper who has somewhat famously flip-flopped on his feelings of gun control as of late.

Republicans did oust at least one staunch anti-gun incumbent.

In Illinois, Republican Bruce Rauner has narrowly pulled ahead of sitting Democrat Gov. Pat Quinn. Quinn, who has consistently championed a renewed assault weapons ban in his 12 years in the governor’s mansion, however is not conceding anything until the final votes are counted.

Elsewhere in the state, Massachusetts attorney general candidate Maura Healey became the country’s first LGBT attorney general. Winning a primary victory in which smart guns were an issue, Healey told an audience at a debate last week that the Supreme Court “went too far” in establishing an individual right to bear arms in the 2008 Heller ruling.

In a seemingly pro-gun victory, Republican Larry Hogan has beaten Democrat Anthony Brown for the open seat in Maryland’s governor’s office. In that race, to helm a state with some of the strictest gun control laws  in the country, the NRA graded Hogan as an A-candidate while Brown was classified as an F.

Republican Gov. Tom Corbett who recently signed what is called one of the “strongest firearms preemption statute in the country,”  lost his reelection bid to helm the state of Pennsylvania for another term to Democratic challenger Thomas Wolf, who carries an F rating from the NRA. 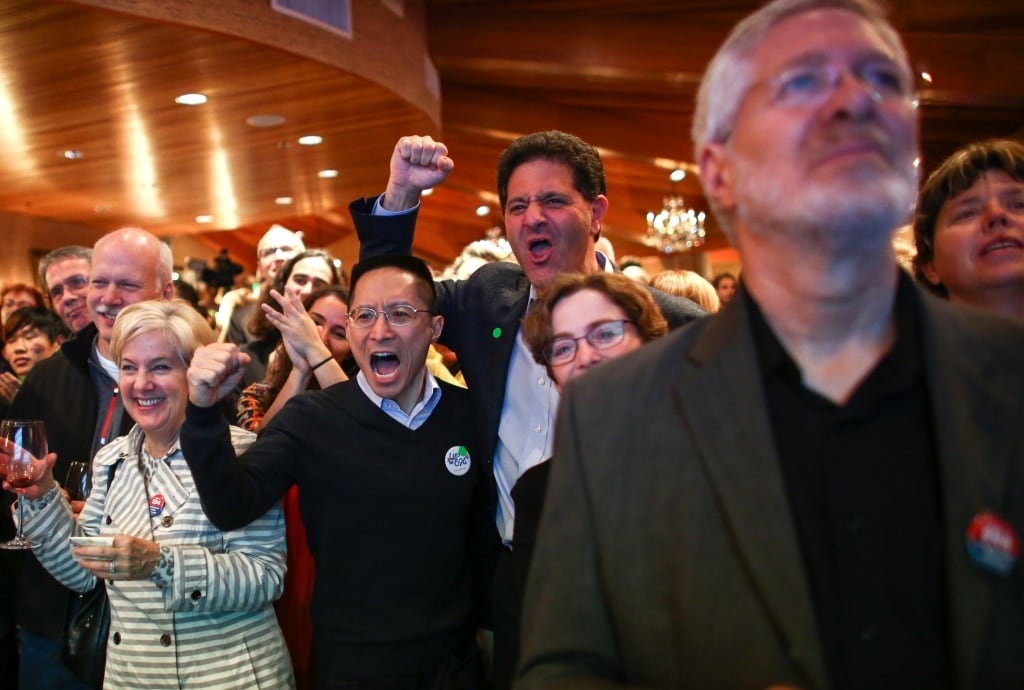 Nick Hanauer, center, who helped back Initiative 594 to the tune of nearly $2 billion, cheers with others during an Initiative 594 return watching party at the Edgewater Hotel in Seattle. (Photo: seattlepi.com)

In perhaps the most-watched of the 146 ballot referendums in the country, 60 percent of Washington state voters approved Initiative 594, an 18-page measure that will greatly expand background checks to include almost all gun transfers in the Evergreen State. A counter-initiative, I-591, which would have largely kept the status quo unless federal law changed, garnered 45 percent of the vote.

“Some of the world’s wealthiest elitist billionaires bought a ballot measure much like they buy sports teams,” said Alan Gottlieb, chairman of the Citizens Committee for the Right to Keep and Bear Arms, in an email to Guns.com Wednesday. Gottlieb’s group had spearheaded opposition to I-594 and backed I-591 as an alternative.

In Mississippi and Alabama, so-called sportsmen’s amendments to the respective state constitutions that would enshrine the right to hunt and fish for future generations passed easily.

The Humane Society of the United States counted a victory in their efforts to help keep wolf hunting off the list of possible conservation methods in Michigan with the approval of a pair of ballot initiatives. However, state wildlife officials cautioned that it was a hollow victory of sorts as Michigan has only held one wolf hunt in the last 75 years.

In another anti-hunting campaign pitting the HSUS against state conservation officials, a ballot initiative in Maine to eliminate several methods of bear hunting was defeated for the second time in ten years. Maine will remain the only state to allow hunting of bear over baited fields with the assistance of dogs and traps to help control its expanding population.

Remain with Guns.com for continued analysis of how the outcome of this election will affect gun politics in coming months and years.