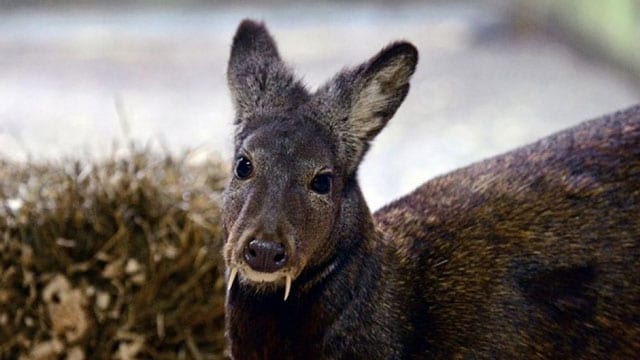 For the first time in nearly 60 years, the Kashmir musk deer, which is known for its unique vampire-like fangs, was spotted in a remote forest area of northeastern Afghanistan. The last known sighting of the deer, which is native to the Himalayas, was in 1948.

Only the males have fangs, which apparently are used during mating season as males compete for females.

The musk deer are an endangered species and are sought after for their meat, as well as their scent glands, which are believed by some to have pharmaceutical properties. In fact, the glands go for an astounding $20,455 per pound on the black market. In addition, poaching, human development and 30 years worth of war have robbed the musk deer of their favored habitat.

“This rare species, along with better-known wildlife, such as snow leopards, are the natural heritage of this struggling nation,” Peter Zahler, deputy director of the Wildlife Conservation Society’s Asia Programs, said in a statement. “We hope that conditions will stabilize soon, to allow WCS and local partners to better evaluate conservation needs of this species.”