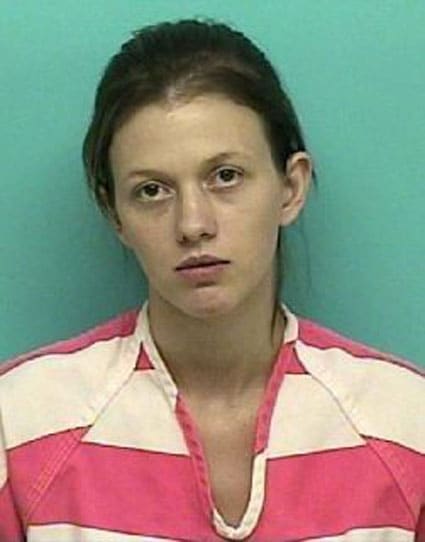 Heather Hodges wanted to teach the boy a lesson, but in the end, she was the one that ended up being punished. (Photo: Montgomery County Sheriff’s Office)

A Montgomery County court determined last week that a 28-year-old mother of two will spend the next three years in a Texas state prison for planting a gun in the backpack of her live-in boyfriend’s son, only to turn around and call the school to report that he had a gun.

Heather Hodges had apparently been upset with 13-year-old James Bailey McKeegan, her boyfriend’s son, because she felt he was mistreating her children, The Courier of Montgomery County reported. So on the morning of Nov. 5, 2012, Hodges took her boyfriend’s 9mm Smith & Wesson and placed it in the boy’s backpack.

After McKeegan was taken to school, Hodges went to a nearby pay phone and called in an anonymous tip that McKeegan had brought a gun to school. The school’s Assistant Principal, Donna Covarrubias, called McKeegan out of his gym class to search his bag. Covarrubias testified that the boy did not hesitate to show her the contents of his backpack.

“When he saw the gun, his face turned stark white,” Covarrubias said.

Retired Montgomery County Sheriff’s Office investigator Mike Price was called in to help with the case. Price said he initially was the “lone wolf” in thinking there was more to the incident than what was originally believed by authorities.

Nonetheless, McKeegan still faced expulsion and was also taken into custody and booked into the Montgomery County juvenile detention facility, where he spent several days before Hodges, after multiple interviews with investigators, finally confessed to planting the gun in his bag.

At first, Hodges denied any involvement, but investigators were eventually able to trace the anonymous call back to the pay phone and confirm Hodges’ vehicle was near the location of the pay phone when the call was made. In addition, the voice from the call matched Hodge’s voice recorded during a police interview.

“It was very unusual,” Price said. “Initially, we wanted to know what was (McKeegan’s) intent with the pistol. Did he bring it to school to harm someone, or just to show to his friends? He kept insisting that he knew he brought a gun to school, but he didn’t realize it until the principal found the gun in his backpack. He was insistent.”

Covarrubias also said McKeegan was “very believable” when she questioned him about the handgun.

But eventually the entire story came to light.

“It took the District Attorney’s Office a couple of days to do some research to determine what charges to file, because none of us had ever heard of anything like this taking place before. I’ve never seen it, talked to anybody who’s heard of it. It’s very unusual and very unique,” Price said.

District Court Judge Kelly Case reprimanded Hodges for her behavior during the sentencing.

“(McKeegan’s) life will never be the same,” Case said. “For whatever reason you decided to blame that child, I find irrelevant. The fact that you’re not on drugs, or have a major personality disorder puts you in the category of being someone I would call ‘evil.’ I cannot fathom why you thought this would be a good idea. It makes no sense to me.”

Following the incident, McKeegan moved out of the state to live with his mother in Louisiana.