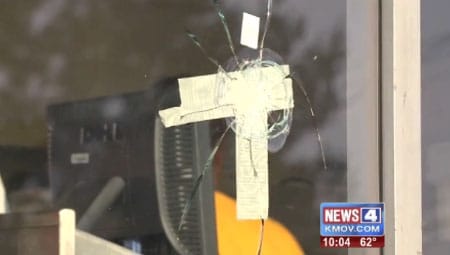 Bullet holes remain in the windows, remnants of the robbery, which the owner says was the first one he has experienced in the more than 25 years he has been in business. (Photo: KMOV)

One suspect is in the hospital recovering from multiple gunshot wounds and a second is being sought by police after a pistol packing pizzeria owner thwarted an attempted robbery.

The owner of Elicia’s Pizza in St. Louis said he was doing dishes in the back around midnight Sunday morning when the two suspects entered the restaurant, both armed with handguns, and demanded cash.

The owner then emerged from the back room as one of the suspects started grabbing money from the cash register. Meanwhile, the second suspect told the owner and an employee to get on the ground, and that’s when the owner saw an opportunity to take back his store, according to local reports.

The owner, who did not wish to be identified, told KMOV that as he crouched down, he grabbed his handgun, which was secured in an ankle holster. He opened fire on the suspects, who returned fire as they ran out of the establishment.

One suspect, later identified as 28-year-old Romell Cortez Sanders, was struck in the leg and buttocks and collapsed outside of the door. The second suspect took off in a maroon minivan. The owner believes he also struck the second suspect, but officers found no evidence that he had. No one else was injured.

The almost stolen cash and a handgun were recovered from the scene.

Sanders was taken to a local hospital where he remains in stable condition, but police are still searching for the second suspect.

The incident has left the owner shaken up and rethinking security, which he plans to give a boost, especially for the late-night shift.

“When you have a gun in your face, you do anything you can to protect yourself and your business,” the owner said, but “I’m not that type of person that will be taken advantage of, but I am also not the kind of person that is proud or happy that this happened,” he added.

The owner has a concealed carry license and his handgun is legally owned. No charges have been filed at this time for any of the involved parties.