How does someone like Kendall Jones fit in with modern society?

Over the summer, the 20-year-old woman gained notoriety after posting pictures of herself on her social media taken during an exotic game hunt.  The backlash was knee jerk, and pretty much what I’ve come to expect from the army of social justice warriors that permeate modern life.  Though she broke no laws, her photos incited a lynch mob.

She was branded a misfit.  She was accused of killing endangered species. She received death threats.  A liberal politician sexually harassed her by offering a bounty for nude pictures.  An attempt was made to ban her from basically ever using those websites again. 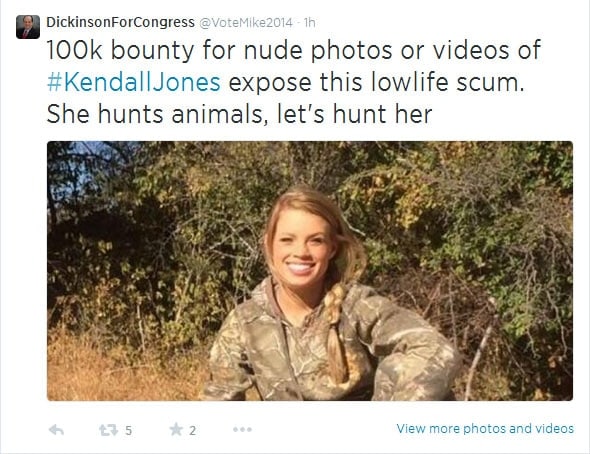 VA Democratic congressional candidate Mike Dickenson offered $100,000 to anyone who can provide him with nude photos of the controversial big game hunter and Texas cheerleader Kendall Jones.

So much noise was made that the nice people at Facebook removed all the photographs of Ms. Jones with her trophies. Their explanation was that it went against their policy to show such graphic images of violence. (One wonders, how can they suggest such a stance, when they freely allow images of be-headed men, women and children, the victims of the ISIS savages, on their site?)

But, thankfully, Ms. Jones has also gained a following of supporters, spearheaded by hunters, gun owners and protectors of free speech — a following that is close to 700,000 strong.  On the heels of this, she received an offer from Remington to star in a new Youtube series titled, Game On. The first episode aired on Oct. 21, and saw Jones hunting alligators down in the bayou state of Louisiana.

So all’s well that ends well?  I’m not so sure.

Today it seems to me that we live in such a hypersensitive society, it’s impossible to engage in any pursuit we find pleasure in without pinging some ignorant strangers “offended” radar… and then having to pay the consequences for their ignorant reactions. I say “ignorant” because I find that rarely do these individuals know the full story (though many claim otherwise and others willfully ignore or downplay the parts they don’t like) and I say “strangers” because their opinions are, to my thinking, largely unsolicited.

Just this Halloween, I was told with a straight face that a child wearing a sombrero as part of his costume was disparaging towards Mexicans. The child was dressed as a mariachi.  And he was part Mexican.  Now, I didn’t think that his sombrero was racist before (or after), but I had to have a conversation about it.  And that’s the problem — what a stupid emotional observation and a waste of my time. 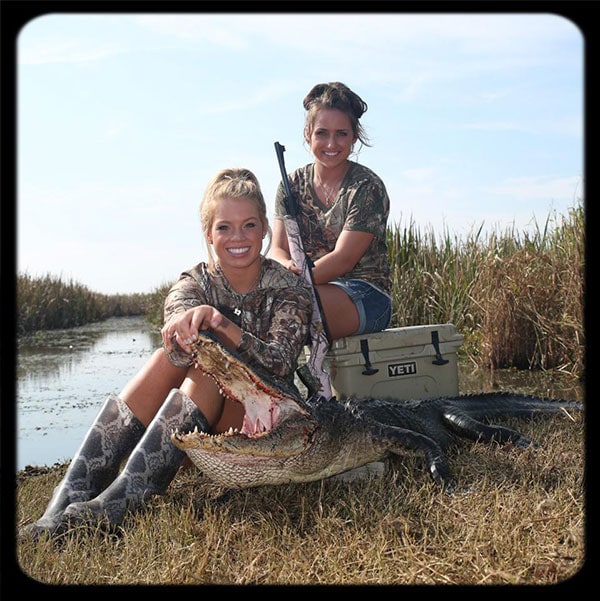 Kendall Jones and her best friend Taylor Altom bag a LA gator in the first episode of their new web series “Game on”.

Every few years, as if on a loop, Washington D.C.’s NFL football team has to defend the name they’ve played under since the 1930s because of the word “Redskins.” The fact that it’s been established over the many years this “issue” has been taken up by the league that Native Americans understand and appreciate the distinction between their people and a sports team name, (with many who actually like the name of the team), it doesn’t stop the professional umbrage takers from picking up the ball and running with whenever the folks in Washington need to change the conversation.

The truth is that the few animals Kendall hunted were not on anyone’s endangered species list.  She (or someone else) paid a lot of money for her to hunt on a game preserve where the animals are plentiful and, in some cases, bred specifically for the purpose of hunting. In the first episode of Game On, she shot only one alligator in a place where alligators have reached such numbers they are considered a nuisance — because hunting is about more than trophies.

From interviews, Ms. Jones appears to me to be a charming (and stunningly beautiful) young lady.  I applaud her for celebrating what she loves to do, because in 2014, that takes a certain type of courage.  Particularly it would seem if you are a good looking woman and the thing you love involves a firearm.

Another blond female hunter, Axelle Despiegelaere, had her L’Oreal modeling contract revoked after she posted this photo to her Facebook account.

A while back, Guns.com writer Will Carey came up with a term for just such a phenomenon — shot shaming.  He described it such: “the conscious act of making shooters and hunters feel guilty or morally inferior for engaging in legal practices and traditions that make non-gun owners feel weak, uncomfortable or inherently question the validity of their worldview… Often associated with punitive social pressures.”

And isn’t that what’s really going on here? It isn’t that Kendall Jones was lucky enough to bag a lion or a rhinoceros. It isn’t because she was in Louisiana hunting alligators, no, not at all. When it comes right down to it, most liberals don’t give a hoot about any of that. What they are passionate about is their misplaced and misguided belief that if we all just simply disarm, the world will be such a wonderful place to live.  And a well spoken, smiling blond girl with model good looks who likes to hunt doesn’t fit in that “utopia.”

I personally do not hunt animals. It’s not that I haven’t done so in the past, it’s just that I don’t enjoy it like I used to. I now prefer to hit paper or metal targets at gun ranges. But many people do enjoy hunting, and I can’t blame them at all — in this writer’s opinion, Jones fits in perfectly well into my modern society. The people who don’t fit are the naive liberal and politically correct munchkins who think their uneducated opinions are more important than the rights and happiness of others.  These people, who do not cherish our rights guaranteed under the Second Amendment to the Constitution, are the real social pariahs.