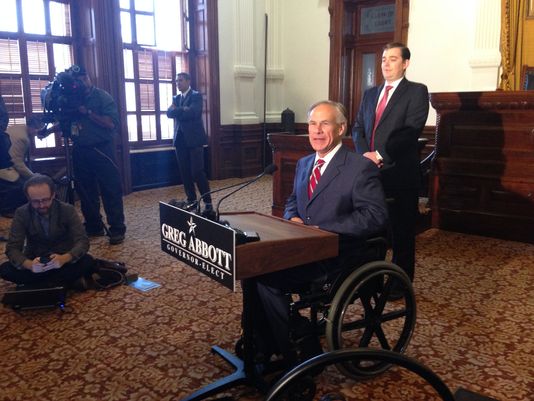 The Lone Star State’s new governor-elect, Greg Abbott (R), fresh from his landslide victory, promised that he would sign an open-carry bill into law if it reaches his desk.

Abbott, former state attorney general, bested his Democratic opponent Wendy Davis this week and is slated to take office in 2015. A repeated promise he had made while campaigning for his new job in Austin would be to approve an open carry bill if given the opportunity.

“Throughout the campaign I announced my support for open carry in Texas,” Abbott told the San Antonio Express-News.  “If an open carry bill is passed by the House and Senate and arrives at my desk I will sign it into law.”

Citing that many states already have similar legislation enacted, his should not be an exception, saying, “If open carry is good enough for Massachusetts, it’s good enough for the state of Texas.”

Since the 19th century, it has been illegal for Texans to carry modern handguns outside of their home, which was only modified in 1995 when the state adopted a concealed carry statute. This leaves lawful gun owners in the state who do not carry concealed with a permit the option of either arming themselves with a primitive black-powder handgun or a long arm such as a rifle or shotgun.

This has led to a number of rallies across the state and a growing grassroots movement to include groups such as Open Carry Texas and Open Carry Tarrant County to push for reform.

In recent years a number of  bills were introduced into the state legislature to establish a framework for permit holders to carry openly, but these did not make it out of committee.

One gun rights group contends this is due to current leadership in the state House.

“Abbott says he’ll sign it, but open carry needs to get to him first,” read a statement on OCT’s Facebook page posted Wednesday. “Call your state representative and demand that he/she support Scott Turner for Speaker of the House over liberal Joe Straus. Strauss [sic] is the reason open carry has failed every time it was submitted.”

According to the Wall Street Journal, Texas is one of only six states that currently have a blanket prohibition on the open carry of firearms including states with such strict gun control laws as Illinois, New York, and California.

Thirteen states allow the practice with a permit while the remaining 31 states don’t require one.