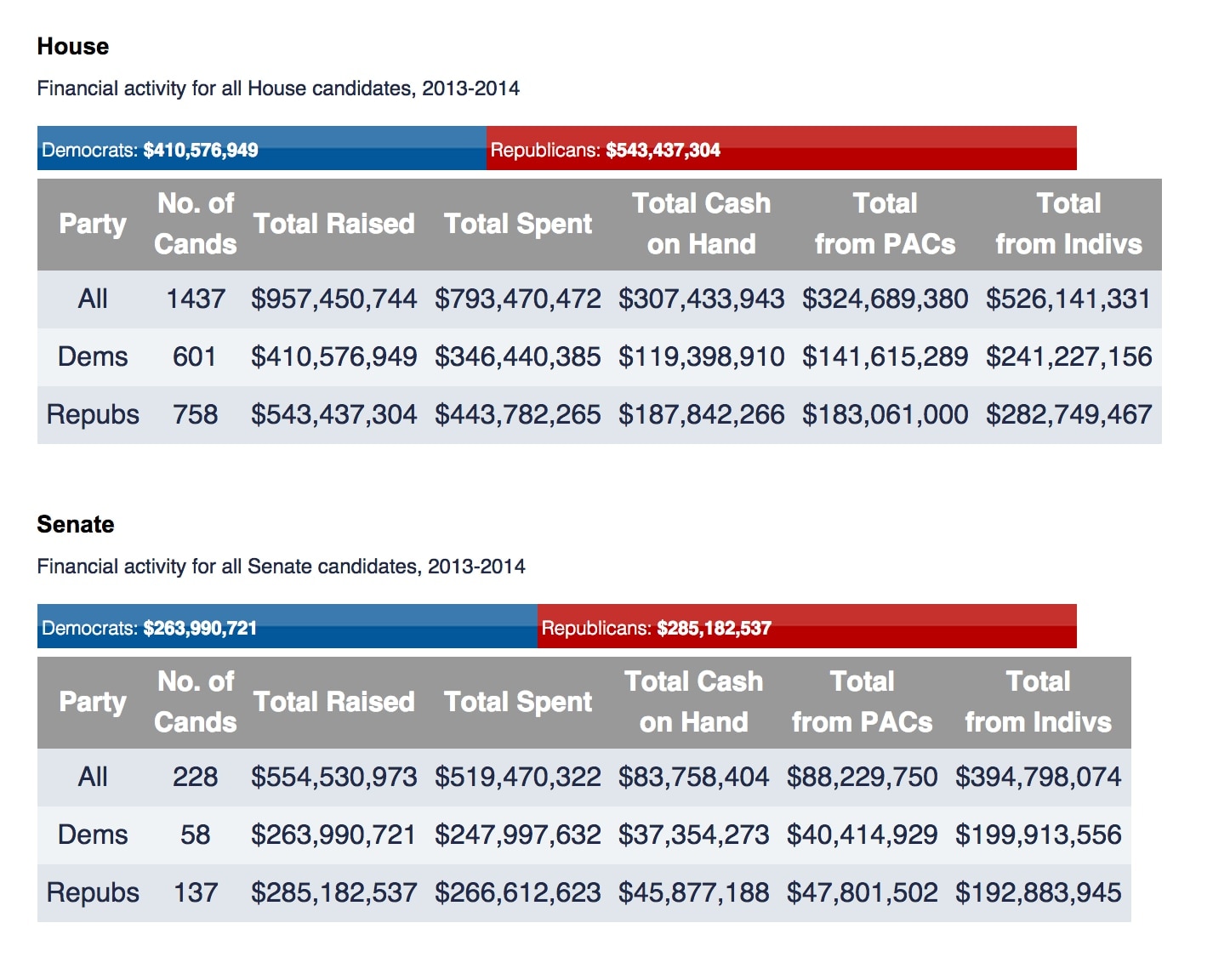 Figures show that more than $1.5 billion was spent on House and Senate candidates during the 2013-2014 election cycle. (Source: Federal Election Commission via Center for Responsive Politics)

With the sweeping victory for Republicans in Tuesday’s elections — the party secured a majority in the Senate — it’s easy to point to correlations to the role money played, but the fact is that outside groups poured money into both parties. While Democrats didn’t enjoy as many victories or a return on investment, millions were spent bolstering Democratic candidates too.

But according to data compiled by the Sunlight Foundation, an organization that advocates for open government and tracks campaign spending, the Republican Party got more bang for its buck. The non-partisan group listed top contributors, which included the congressional and senatorial committees of both parties.

The Democratic Senatorial Campaign Committee put in almost $52 million to back its candidates, only 17 percent of which went to winning candidates. It’s rival National Republican Senatorial Committee enjoyed a success rate of 94 percent, putting in much less — almost $38 million.

The Center for Responsive Politics, another non-partisan campaign finance tracker, found that in the House races, candidates who spent more won 94.2 percent of the time. The Senate race was lower at 81.8 percent.

Outside spending groups dominated the playing field, with top contributors injecting more than $238 million into the midterms.

Big players on the Democratic side included Thomas Steyer and his Next Generation PAC —  which put in more than $73.7 million to back liberals, including losses by incumbent Sen. Mark Udall in Colorado and Rep. Bruce Braley in Iowa — and Michael Bloomberg, who spent more than $20 million of his own money in the 2014 cycle. Bloomberg’s Everytown for Gun Safety put in $4 million to back a winning gun background check initiative in Washington state.

The Koch Brothers-backed Freedom Partners Action Fund put in $21.5 million, while Koch Industries itself spent about $11 million on ads against Democrats and $6 million on ads for Republicans. The National Rifle Association’s Political Victory Fund spent more than $12 million and saw a 95 percent return rate.

And that’s just in the top Senate races. CRP reported that based on data released by the Federal Election Commission in early November, the House raised more than $957 million for candidates from both major parties and the Senate more than $554 million, for a total of approximately $1.5 billion this election cycle — almost $413 million of which came from PACs that reported their contributions.