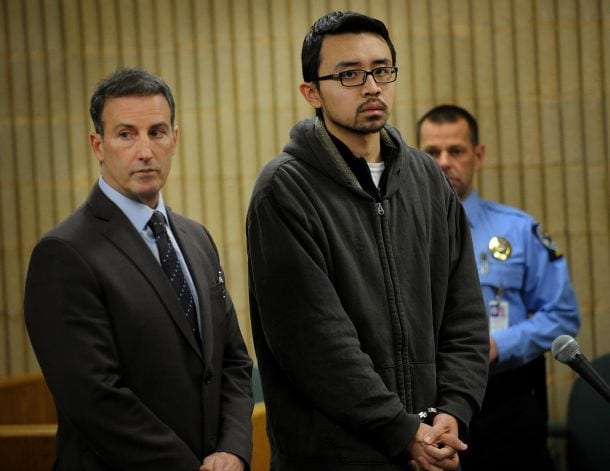 William Dong is facing five years on federal charges in addition to the two he picked up from the state in a case that friends call a huge misunderstanding. (Photo: Brian A. Pounds/Fairfield Citizen)

A college student who was arrested after being found with a rifle in his SUV off campus, pled guilty to a federal weapons charge Thursday of unlawful transport of a firearm.

William Dong, 23, the now-former University of New Haven student incurred the charge when it was discovered he had what Connecticut law classifies as an “assault rifle” that he had acquired legally in Pennsylvania, but illegally transported back to his home state.The student had bought the rifle after closing a deal through guns classified site Armslist.com in September 2013, after Connecticut’s expanded assault weapons ban had taken affect.

Since the Bushmaster XM-15E2S was prohibited in Connecticut, he was charged with a violation of interstate commerce under federal law. Dong entered a guilty plea in U.S. District Court in Hartford and now faces a $250,000 fine and up to five years in federal prison.

Attorney Frederick Paoletti Jr., Dong’s representative, told the New Haven Register that his client had no intention to hurt anyone.

In fact, previous statements from Dong’s friends stated that the whole incident was just one huge misunderstanding. They contend he had the rifle in his vehicle because he was an avid target shooter and had intended to go to the range the next day.

Dong was arrested in 2013 on university grounds with two handguns in his possession while the rifle was locked in his SUV off campus.  Dong, who worked at the time for an armored car company, had a clean record and permits for his handguns. His arrest stemmed from a police manhunt after a homeless woman saw the rifle in his vehicle at a drugstore near campus and called authorities to report it.

Charged by the state over the handguns with two counts of having a firearm on unauthorized premises since the university had prohibited guns even with a permit, Dong entered a guilty plea in a local court in exchange for an expected two-year sentence in October.

In custody since last year at MacDougall-Walker Correctional Institution in Suffield, Dong faces his sentencing hearing from the state of Connecticut Dec. 19.

U.S. District Judge Robert Chatigny is expected to hand down his additional federal time at an upcoming hearing Jan. 29, 2015.