Colt is dropping new rifles onto the consumer and law enforcement markets with four modular MARC 901 AR-based rifles chambered for .308 Winchester. These rifles can be adapted to suit many needs from self-defense to target shooting and hunting game of all types.

The rifles follow in the footsteps of Colt’s previous flagship .308, the LE901-16S. MARC — Modular AR Carbines — 901 rifles also can be converted from .308 to 5.56 NATO with an magwell adapter and standard AR-15 upper receiver.

The MARC 901 series will be offered alongside the original model and give customers the option of updated rifles in a wider variety of configurations and best of all, a new, lower price point. Colt is even adding a budget model that’s even more wallet-friendly.

Colt will offer three models based directly on the original LE901-16S. These are enhanced or “SE” LE901 rifles with updated, modular monolithic upper receivers and a new AR901 rifle, the AR901-16S. The AR design is built with a standard two-piece upper with tubular handguard.

The big change to the design is the modular upper receiver. It’s been lightened with cutouts and opts for a modular rail system. 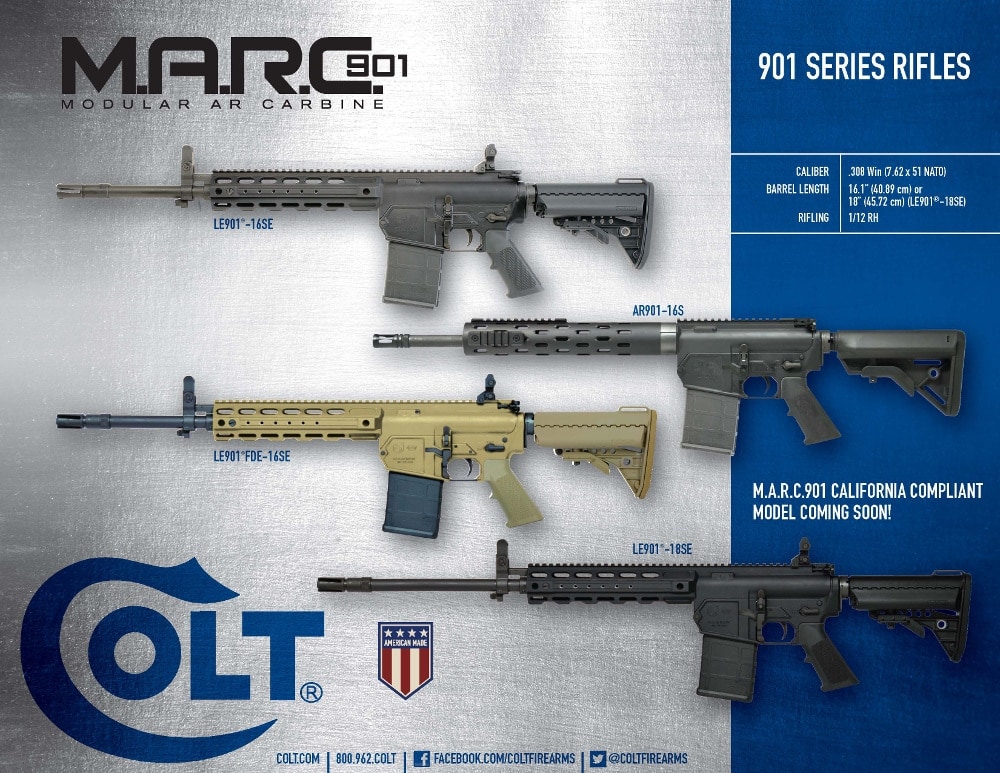 The four new models. The original LE901-16S will remain in production. (Photo: Colt)

These new models maintain the full-length flattop rail that’s perfect for directly mounting magnified optics to the receiver, no cantelever mount needed, and the 3-, 6- and 9-o’clock rails have been milled off and dehorned for a comfortable grip. Users can still mount accessories to the sides and bottom of the handguard with optional adapter rails.

The changes not only give users more options and a better grip, they bring the weight down to just under 8.5 pounds, a full pound less than the original.

Otherwise the new SE rifles maintain the features people have come to expect when they pick up an LE901. They have extended triangle flash hiders, folding VLTOR front sight blocks, low-profile folding VLTOR rear sights and VLTOR buttstocks. They’re good to go out of the box with a 20-round Magpul PMAG where available.

The updated SE rifles have a base price of $2,181 with the FDE carbine running $100 extra. Essentially the new rifles have MSRPs that start at where the retail price of the old LE901-16S floats.

The fifth and non-LE model, the AR901-16S, is the new budget offering and hopefully the first in a series. It deviates from the other models in more ways than one. It uses a few less expensive — although not low quality — components including an A2-style birdcage flash hider and a B5 Systems SOPMOD Bravo stock.

Lastly, the AR901-16S doesn’t come with sights. The tubular handguard is still modular and can be fit with Picatinny rail sections for use with irons or left smooth to use with a riflescope. It does come with a 20-round PMAG, that is still standard.

Conversion kits for these rifles are sold separately and list on the Colt web store for $199 and probably less at your friendly local gun store if they order them for you. They include the magwell adapter, buffer and buffer spring needed when used with 5.56 uppers.

California-complaint models are in the works as well, so keep an eye out if you live in the Eureka state. Colt’s got your back. For more details and specifications about these new rifles go on over to the Colt website.