Editorial: What would a police response to an 'Ebola epidemic' look like?

Will SWAT teams surround homes and forcefully quarantine suspected Ebola patients in the near future?  Is that even possible or practical?  Is it even legal or tactically prudent to do so?

By all means, an Ebola epidemic could become widespread–it could turn into a large-scale pandemic and kill hundreds or even millions.  There’s no doubt health officials should be concerned (but not totally scared by the media hype).  The problem is how do we contain Ebola from spreading like wildfire without taking away the freedom and liberty of others who may or may not be infected with the virus? Certainly there are legal considerations here.

I want to examine the tactical law enforcement logistics given a scenario where the need for Ebola containment increases even more than today.  But first, let’s take a look at a recent situation.

A nurse that went to Africa returned to the US and was put into quarantine.  New Jersey, and later Maine, mandated that she had to stay in her home for 21-days.  Nevertheless, she defied the order and went on a bike ride with her boyfriend.  Because of (or despite) the possibility of lethal contagion, an entourage of spectators, including media personnel and law enforcement, followed her. 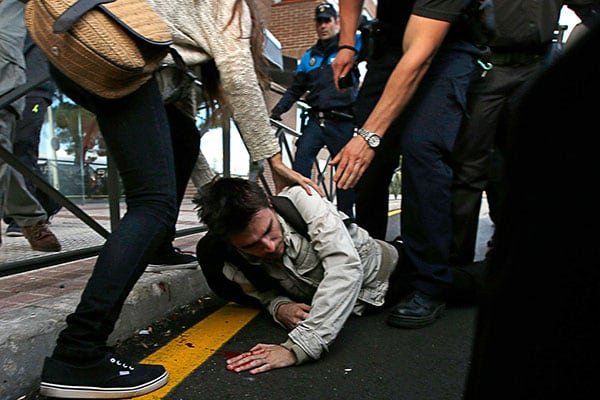 Ebola virus disease (EVD), formerly known as Ebola haemorrhagic fever, is a severe, often fatal illness in humans. It is transmitted through contact with bodily fluids.

Ebola kills about 50% of the people it infects.  It spreads through human-to-human transmission via direct contact (through broken skin or mucous membranes) with the blood, secretions, organs or other bodily fluids of infected people, and also via surfaces and materials (e.g. bedding, clothing) contaminated with these fluids. That in and of itself is cause for extreme concern, but at the outset, health officials and police may find themselves having to concentrate more on managing the human psyche than the body.

Certainly someone who knowingly has Ebola would receive a different tactical reaction from someone who might have it, right?  Maybe.  Either way, let’s say a person is ordered by the state or government health officials to be quarantined.  What then are the most immediate potential risks if that person went into, say, a crowd of people at the mall?  It’s doesn’t take much of an imagination to see that such a scenario could turn really ugly.

After the virus’ incubation period in the exposed (2-21 days according to the World Health Organization), a bunch of people might get infected. But if someone knowingly had the virus and defied orders to stay away from others, and did not take the proper steps to cover up their mouths with a mask or their exposed body sores (assuming they are showing this symptom), this could bring mass panic to say the least, possibly resulting in serious injuries.  \

Most states’ laws include criminal codes that prohibit people who knowingly possess certain types of transmittable and dangerous diseases from knowingly or intentionally spreading that disease.  For instance, if a person who is HIV-positive rapes another person, the charge could get enhanced.  The same goes if that person spits upon another person, for instance, knowing that they could spread their disease through his act.  Currently, Ebola appears to spread quicker, so these laws need to be vigilantly enforced. 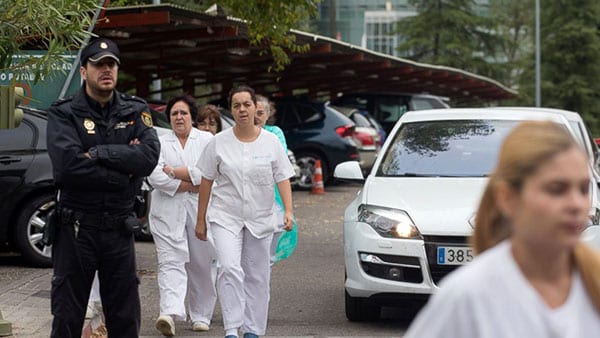 So, how would police stop Ebola suspects (er, victims) that need to stay away from others?  Assuming such laws are put into place, police could follow, say, nurses on an early morning bike rides to make sure they are obeying the law and only intervene if absolutely necessary.  This comes with its own set of concerns.

In the recent outbreak here in the US, the second person to die from an Ebola contamination was a police officer.  The fact is, regardless of the use of barriers in the form of gloves and masks, first responders are more likely to come into contact with those who have communicable diseases than any other profession besides those in the hospitals and medical aid stations.  Moreover, police will be called to investigate criminal activities and 911 calls, all of which could put them in direct contact with unknowingly infected persons.

A large number of infected officers could lead to the worst case scenario: the National Guard would be activated.

The other option police have is to surround the person(s) who has Ebola by setting armed guards all around, say their home or place of employment.  If an apocalyptic-type disaster occurred to, say, hundreds of people held up in a shopping mall, imagine the tactical logistics there!  These cases would be like containing barricaded, armed and dangerous felons at the largest scale (e.g. 1997 Lima, Peru hostage taking).

Going hands-on (e.g. apprehending people with the virus) presents a different problem.  Police would need serious personal protective equipment (PPE) when getting close.  An N95-rated mask, some eye pro, and even disposable coveralls could work well.  Gloves, too, of course.  In a situation more prevalent with the virus, perhaps donning gas masks, like the Avon would be helpful.  Armed tactical units with self-contained breathing apparatus (SCBA) gear would only be needed in the end-of-days type scenario. 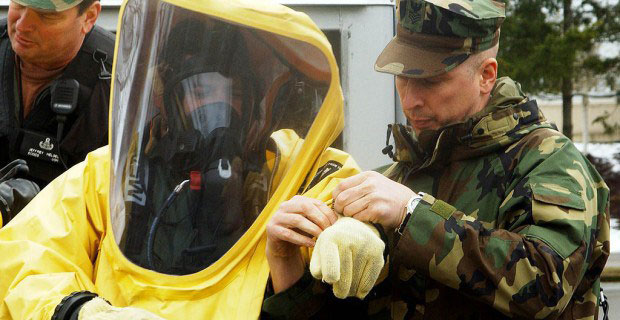 National guard outfits an officer in personal protective equipment, including a N95-rated mask.

Decontamination, in conjunction with local fire departments, would be a whole other issue, not to mention where does someone house a person who has Ebola and is arrested?  Putting someone like that in a jail could potentially contaminate the entire prison population, including corrections officers and staff members, who in turn could take the virus home to their families.

Not only would police be tasked with surrounding and containing potentially harmful persons or facilities in an outbreak, they’d need logistic support to still assist those people, too.  Just like in long-term hostage situations, food, water and medical attention needs to be administered to the quarantined.

To achieve this, police would likely have to maintain two perimeters.  The inner perimeter would watch out for infected or exposed people defiantly trying to leave (and perhaps take them down with less lethal capabilities, like a Taser or less lethal impact munitions), while the outer perimeter would keep healthy people from coming in and thus risking exposure to the virus.

And also consider this: what if some less-than-civil citizens came armed to “take out” the Ebola problem on their own?  In that scenario, police would have to protect the “arrestees”.  That’s their job.

But the sad reality is, there simply aren’t enough resources—there are not enough police—to contain a mass outbreak in multiple places.  Anyone who remembers the catastrophe that happened during Hurricane Katrina, realizes Ebola might be serious mass chaos.

Let’s hope it never gets that far, and the infected stay off their bicycles.