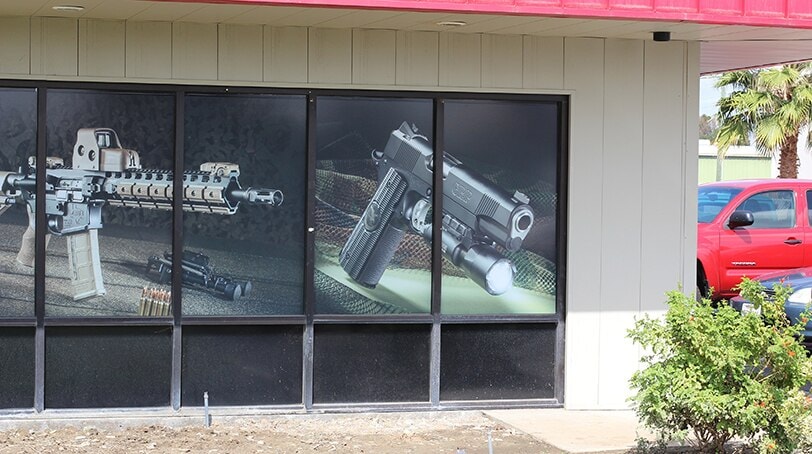 Tracy Rifle paid some $3,000 for the window wrap advertisement and has until February to comply with a Bureau of Firearms order to remove it. (Photo: Tracy Rifle and Pistol)

Tracy Rifle and Pistol, a gun shop and indoor firing range located about 60 miles east of San Francisco in San Joaquin County, was cited by the Department of Justice’s Bureau of Firearms on Sept. 12 for displaying pictures of handguns in its windows, according to the inspector’s report.

According to state law, images of handguns cannot be displayed so that they are visible from the outside of a building and Michael Baryla, owner of Tracy Rifle, has until February to comply.

Baryla contends that law-abiding citizens have the right to exercise their Second Amendment rights as his company has the right to the dissemination of non-misleading commercial information about his products. Baryla paid about $3,000 to wrap the windows of his business with the advertising, he told Guns.com.

“I run one of the most heavily regulated and inspected businesses in existence, but it’s still illegal for me to show customers that I sell handguns until after they walk in the door,” Baryla said. “That’s about as silly a law as you could imagine, even here in California.”

Other states, like Pennsylvania, Texas and Washington D.C. have similar laws, but rarely, if ever, enforce them, Brandon Combs, executive director of the Calguns Foundation, told Guns.com

The defense further argued that although gun store owners can’t advertise their wares, gun control protestors are not restricted from showing such images, which shows a “viewpoint-based discrimination” and is thus unconstitutional.

“The First Amendment prevents the government from telling businesses it disfavors that they can’t engage in truthful advertising,” said attorney Bradley Benbrook. “This case follows a long line of Supreme Court cases protecting such disfavored businesses from that type of censorship.”

The other plaintiffs include Ten Percent Firearms, which was issued a similar citation; as well as Sacramento Black Rifle and PRK Arms, businesses that have joined the case because their owners want to put up advertising, but are fearful of the legal consequences.

Bringing Ten Percent aboard is all about showing a history of enforcement, Combs said. The company was cited some time ago by the Bureau of Firearms for displaying a large metal cutout of a revolver on a steel sign.

The fundamental question in this case revolves around whether guns are obscene and whether they need to be hidden from public view. Combs argues no.

“And handguns are the most protected weapon under the Second Amendment,” Combs said.

Even though the First Amendment allows for the regulation of some things, you can’t say handguns are obscene just because some government officials don’t like them, Combs said.

“Laws, like the ones we’re challenging here, really go a long way to keep gun owners in the closet, so to speak,” Combs said.